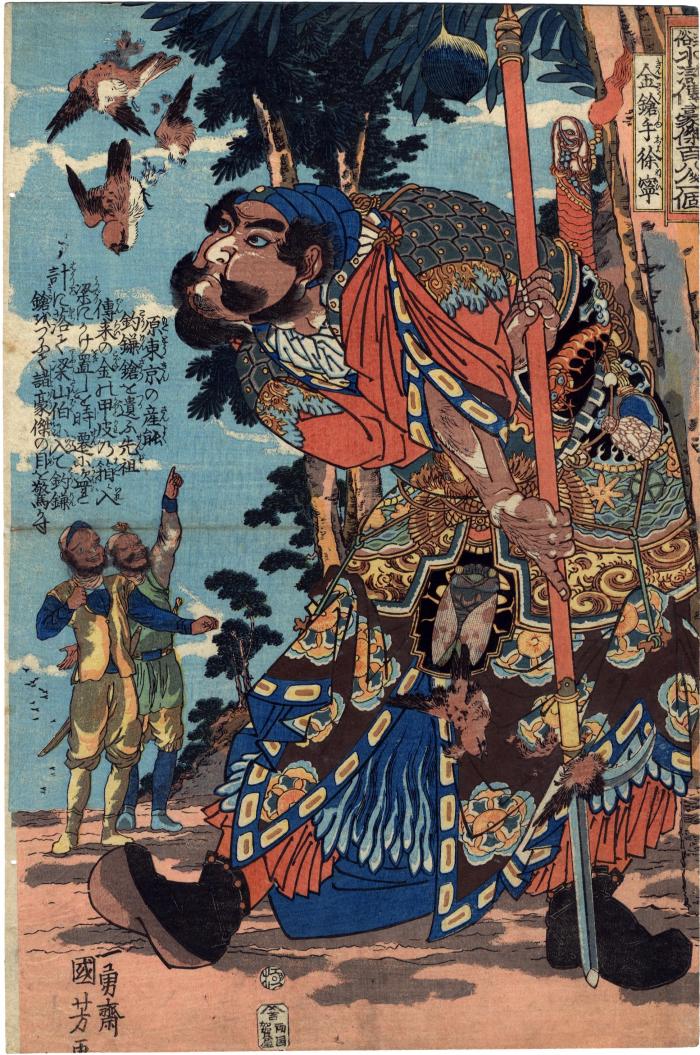 "In Kuniyoshi's portrait of Jonei, the hero has just given a show of his favorite weapon, although in this case he holds a smooth lance rather than a hook-bladed spear. In the background two men in western-style clothing watch with admiration as the Ryōsanpaku rebel cuts off the wings of two sparrows. The influence of Western art is likewise seen in the cloud formation and in the play of light and dark which is best seen in the depiction of the two spectators, the trunk of the tree and the umbrellas on the ground. Noteworthy also is the nusual pulisher's seal of Kagaya Kichibei. The name Kagaya is written in kanji ('Chinese characters') rather than in hiragana (cursive Japanese syllabary) as is customary in most examples in this series." Quoted from: Of Brigands and Bravery: Kuniyoshi's Heroes of the Suikoden by Inge Klompmakers, p. 114 with a full-color image on p. 115.

Xu Ning is first mentioned at the beginning of chapter 56 of the Outlaws of the Marsh. This is on page 899 of volume II.

"My ancestors have always been armorers," Tang Lang said to the chieftains. "Because of this skill my father was raised by Border Area Governor Old General Zhong to be head of the Yanan garrison. The linked cavalry method won victories for the previous emperor. The only way you can beat it is with barbed lances. I have a drawing of such a lance, passed down to me by my family, which can serve as a likeness. I can make one for you, but I don't know how to use it. Only my cousin, an arms instructor knows. The art has been handed down from generation to generation. They never teach it to any outsider. My cousin can ply the lance ahorse or on foot. When he goes into action, he's like nothing human.

If you look closely at his outfit you will see a centipede decorating an area toward his back above his waistline and a large cicada, as if seen from above, in the center below. Two of the falling, slain sparrow are in front of the lower half of his clothing. Two small pieces of brown coral have been attached to his outfit by some kind of cordage.