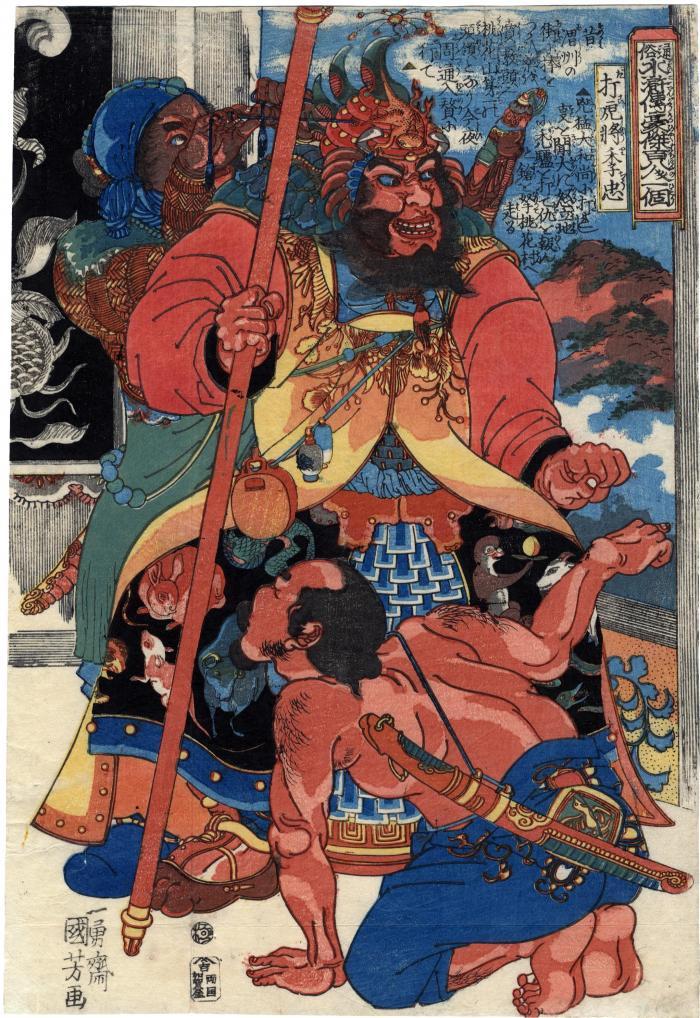 Li Zhong first appears in Chapter 3 in the Chinese version of the tale of the marsh bandits.

Lu Da and Shi Jin strolled down the street arm in arm. Before they had gone fifty paces they saw many people gathered around an open plot of ground.

They pushed through the crowd. There in the center was a man holding a dozen or so staves. Various packets of salves and ointments, with prices marked, were arrayed on a platter on the ground. The man was a medicine pedlar who attracted customers by putting on a show with weapons.

Shi Jin recognized him. It was his first arms instructor Li Zhong, nicknamed the Tiger-Fighting General.

"What are you doing here, young brother?" Li Zhong cried.

"Since you're Young Master Shi's teacher," said Lu Da, come and have a few cups with us."

"Gladly, just as soon as I've sold some of these medicines and earned some money."

"Mine is a hand-to-mouth existence, Major. Go ahead. I'll catch up with you later.... Young brother, you go on first with the major.

Lu Da was very irritated. He roughly shoved the spectators aside. "Haul your ass holes out of here or I'll beat you to a pulp," he bellowed.

The crowd, recognizing him, hastily scattered. Li Zhong was angry, but he dared not protest. Lu Da was obviously much too fierce. "How impatient you are," Li said with a placating smile. He gathered up his arms and medicines, gave them to a friend for safe-keeping, and set off with Shi Jin and the major.

Notice that in the area of Daskoshō Richū's apron, immediately behind the kneeling supplicant are several of the animals of the Zodiac: on the left are the hare, the dragon, the rat and the ox; on the right are the monkey, the goat and the snake.
Kagaya Kichiemon (加賀屋吉右衛門) (publisher)
Suikoden (水滸傳) (genre)