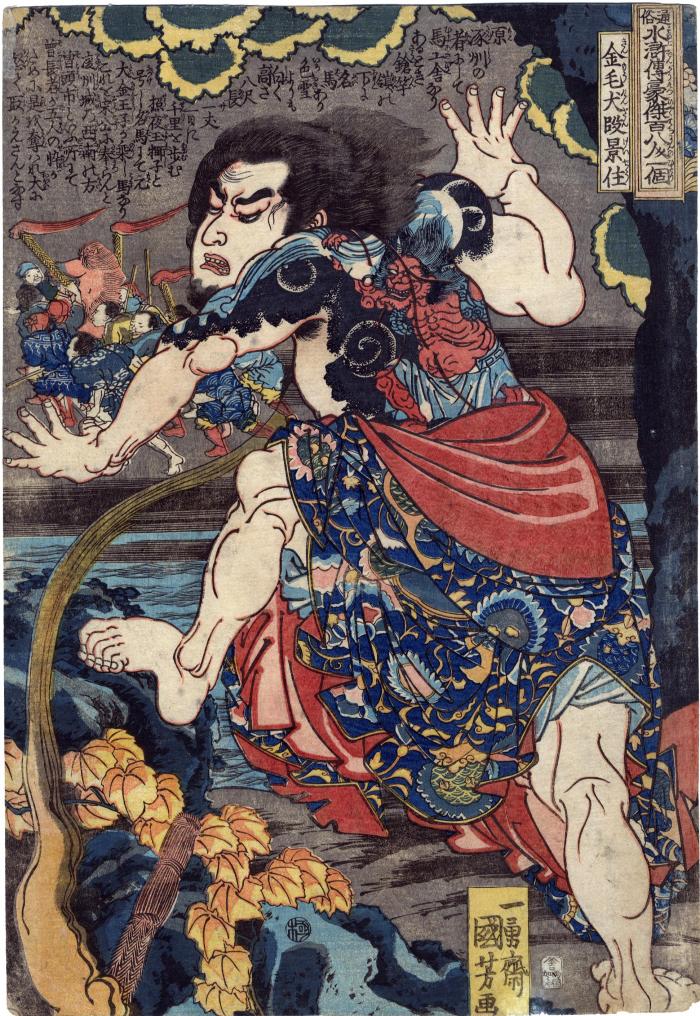 We first encounter Duan Jingzhu in chapter 60 of the Outlaws of the Marsh, volume II, 965:

Dai Zong flew up the mountain to report their arrival. As they were about to ford the river at the edge of the marsh, a big fellow on the road near the reeds saw Song Jiang and kowtowed. Song hastily dismounted and raised the man to his feet.

"What is your name, sir, and where are you from?"

"My family name is Duan, my given name is Jingzhu. Because of my red hair and yellow beard, I'm called the Golden Dog. My family are from Zhuozhou Prefecture, and I earn my living rustling horses in the north. This spring I stole a splendid animal north of the Spear Range. It's white as snow, without a single hair of different color. From head to tail it's ten feet long, and stands eight feet high from hoofs to back. It can cover a thousand li in a day. It's famed throughout the north as the White Jade Lion That Glows in the Night. It belonged to a prince of the Tartars. When it was put out to graze at the foot of Spear Range, I nabbed it. In the gallant fraternity the Timely Rain is famous, but I never had a chance to meet you. I wanted to present you with the horse as a mark of my respect. But while traveling through the village of Zengtou, southwest of the prefectural town of Liangzhou, it was seized from me by the fifth son of the Zeng family. I told him it belonged to Song Jiang of Liangshan Marsh, but the churl was very insulting, and I dared say no more. I got away as quickly as I could. I've come here specifically to inform you.

Song Jiang took a liking to the thin rough-looking fellow. In spite of his odd appearance, he was clearly not an ordinary person.

"Come with us to the stronghold," he said. "We'll tlak about it there." He took Duan in his boat and they crossed to the Shore of Golden Sands.

Note that Kuniyoshi's figure does not have red hair and a yellow beard. Artistic license.

The British Museum notes that this figure has just thrown down a flaming torch - seen in the lower left of this print - while in pursuit of a group of horse thieves. The horse is not easy to make out, but it is definitely there in the mix.

We would also like to hear a cogent discussion of Kimmōken Dankeijū's tattoo. That red devilish looking figure with horns is Fujin (風神), the god of the winds, on his back. He can also be identified by the large bag of wind he is carrying over his shoulder. A subtle but wonderful touch is that Fujin is mirroring the behavior of Kimmōken Dankeijū himself.

"Kimmōken Dankeijū is described in the Shuihu zhuan as having red hair and a blond beard. He has spent his entire life horse thieving. One day he steals a valuable snow-white steed name 'White lion that shines in the night' that is able to run more than 300 miles a day. In Chapter 59 Dankeijū sets out for Ryōsanpaku to offer this wonderful beast to Kohōgi Sōkō, but when near the Sō-family village, the horse is stolen by the fifth son of the village head. Dankeijū continues his trip to Ryōsanpaku and relates the bad news to Sōkō; he also joins the rebel band at this time. In Chapter 67 Dankeijū is robbed again by members of the Sō family, just after he has purchased a couple of horses for the Ryōsanpaku gang. The second theft results in a fight between the Sō family and the bandits: the victory goes to Dankeijū's friends."

Quoted from: Of Brigands and Bravery: Kuniyoshi's Heroes of the Suikoden by Inge Klompmakers, p. 148 with a full-page color reproduction on page 149.