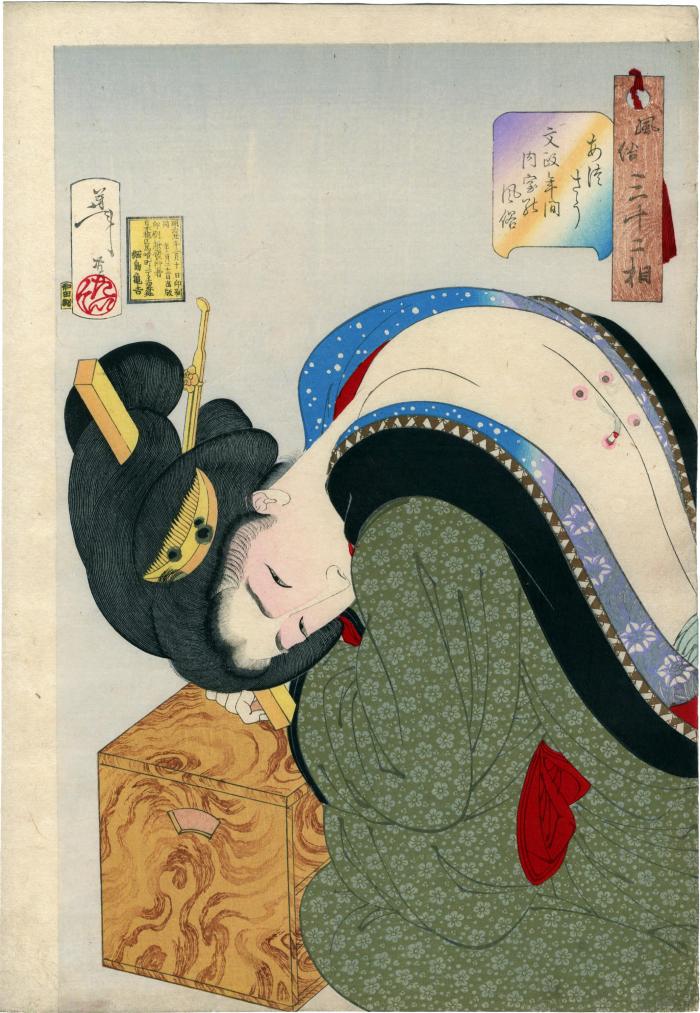 1888
10.375 in x 15 in (Overall dimensions) Japanese woodblock print
Signed: Yoshitoshi ga
Artist's seal: Taiso
Publisher: Tsunashima Kamekichi
British Museum
National Diet Library
Edo-Tokyo Museum
Hagi Uragami Museum of Art
National Library of Australia
University of California
Centre Céramique de Maastricht
Ritsumeikan University
Nelson Art Gallery
Museum of Oriental Art, Venice (via Ritsumeikan University)
Minneapolis Institute of Art "The rather troubled lady is being treated with burning moxa. Small mounds of this slow-burning material have been applied to the specific areas of her back. Moxibustion operates on principles similar to those of acupuncture, where points along the flow of life-force within the body are stimulated. Unlike acupuncture, moxibustion is painful and can leave scars like cigarette burns. A suffering woman is a peculiar subject for this series and its choice by Yoshitoshi... may indicate a certain covert sadism. The sensuality of this design would have been enhanced for Yoshitoshi's audience by exposure of the name of the neck, which was considered an especially erotic part of the body.

The polite term naishitsu, 'inner chamber,' has again been used in the title to indicate a well-to-do housewife...

The lady is bent over a writing desk. A complex burl-pattern has been carved into the wooden printing blocks, a pleasing visual conceit, repeated in the title-cartouche of each design.

She wears a sober outer robe with a small design of plum blossoms and buds. The colors of the replaceable collar of her undergarment have been delicately graded. This collar was called haneri and was chosen carefully to harmonize with the kimono in a pleasing layered effect. The black marks on the comb indicate that is made of expensive tortoise-shell rather than the more usual wood." Quoted from: Yoshitoshi's Women: The Woodblock Print Series "Fuzoku Sanjiso" by John Stevenson, p. 44.