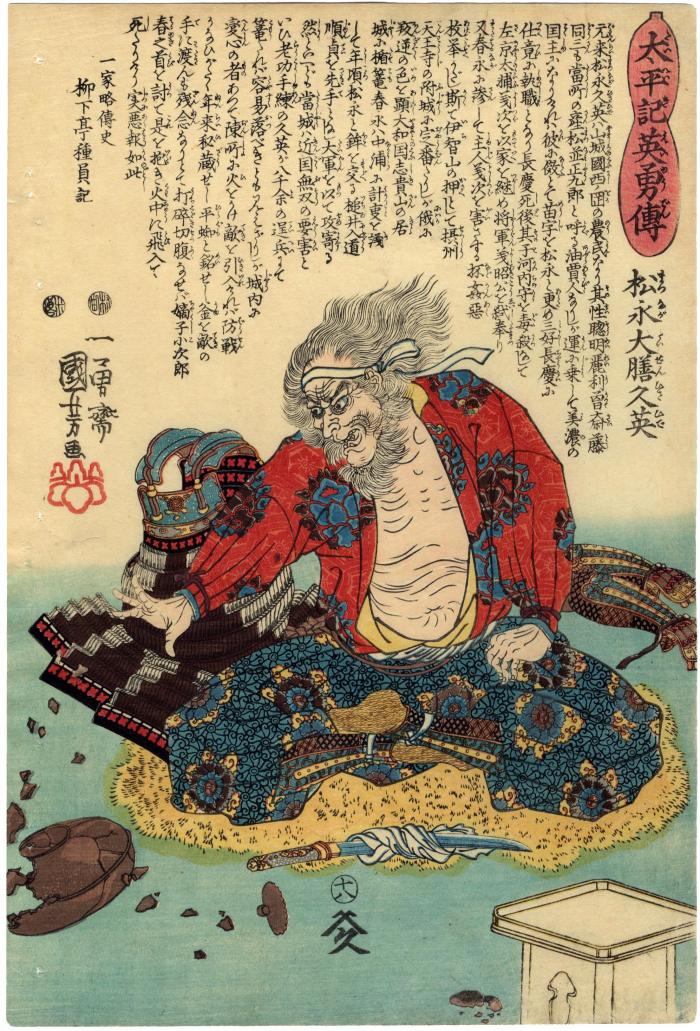 On page 94 Varshavskaya gives a translation of the text on this print:

Originally, Matsunaga Hisahide was a peasant from Nishinooka in Yamashiro province. By nature, he was shrewd and intelligent. Once he changed his surname to Matsunaga, emulating his fellow-countryman Saitō Dōsan... who bore the name of Matsunami Shōkurō... and was an oil merchant, but he took his chance and became the lord of Mino province. [Hisahide] served Miyoshi Chōkei and finally became his private secretary. After Chōkei's death, he poisoned his son Kawachi-no kami. With the help of Sakyōtayu Yoshitsugu, he succeeded to the house of [Miyoshi]. He assassinated shogun Yoshiaki. He also went over to Harunaga... had a part in the death of his own lord Yoshitsugu, and so on - it is hard to count his treacherous actions. To repress the monastery of Ichiyama he stood guard at the fortified Tennōji temple in Settsu province. Suddenly he revealed his rebellious designs and barricaded himself in his residential castle on Mt. Shigi in Yamato province. Harunaga discussed the tactics with Nakaura... and marched a big army forward putting Tsuchii nyūdo Juntei... who had longstanding hostilities with Matsunaga, in the vanguard. That castle was known as a firm stonghold, matchless in the neighbouring provinces. So as Hisahide, an old and skillful campaigner, secluded himself there with over eight thousand sturdy warriors, [the citadel] could not be expected to fall easily. There was, however, a traitor in the castle, who set the quarters on fire and let the enemy in. It became hard to fight in defence. With the words: 'What a pity it would be if the tea-kettle (hiragumo) cherished for years would fall into the hands of the enemy.' Hisahide smashed it to pieces and committed seppuku. His legitimate son Kojiro Haruyuki cut off his head and holding it in his hands, plunged into the flames and died. That is how [Matsunaga's] wickedness was indeed requited.

Varshavsky also noted that the short sword with which Hisahide is about to commit suicide has a cloth wrapped about it half way up the blade "...in order to keep it short enough not to touch the organs, wounding of which could interfere with completion of the seppuku." Nearby is the valued tea vessel he has just broken.

The historical Matsunaga Daizen killed himself alright, but not the way it appears here.

Elena Varshavskaya in her endnotes to Heroes of the grand pacification: Kuniyoshi's Taiheiki eiyū den on page 168 gave a great summary of the life of the historical Matsunaga Daizen:

Originally from a merchant family in Nishinooka in Kyoto, he was in the service of Miyoshi Chōkei... a powerful and influential feudal lord. When Chōkei entered Kyoto in 1549, Hisahide first became a noticeable figure. In 1560 he built a castle on Mt. Shigi from where he governed the provinces of Yamato and Kawachi. Hisahide was steadily destroying the Miyoshi clan which he served. In 1563 he poisoned Miyoshi Yoshioki... Chōkei's son, and made Miyoshi Yoshitsugu... Chōkei's nephew and adopted son, proclaim him, Matsunaga Hisahide, the heir to the house. Two years after that, in 1565, the shogun Ashikaga Yoshteru refused to appoint Hisahide to the position previously held by Chōkei, who died one year earlier. Then Hisahide attacked the shogun's palace Nijo, and the shogun had to take his own life... In the course of the military conflict in Nara in 1568, Matsunaga Hisahide burnt Daibutsuden, the major temple in the Buddhist center of Tōdaiji. Next year, he surrendered to Oda Nobunaga, who made him shugo - a military protector - of Yamato province. After that he fought against Asakura Yoshikage and attacked Ishiyama Honganji... Sometime later together with Miyoshi Yoshitsugu he started a rebellion against Nobunaga. Defeated by Nobunga, he left his associate and thus contributed to the fall of the Miyoshi family. In 1577, Hisahide was contemplating a new rebellion. That time Nobunaga sent his son Nobutada and a vassal Tsutsui Junkei... to besiege Hisahide in his castle on Mt. Shigi. The castle was burnt and Matsunaga Hisahide committed suicide. While Kuniyoshi portrays Hisahide ready to commit seppuku. according to the Shigi castle history his death happened otherwise. Not wishing his head as well as his famous teakettle Hiragumo... to fall to Nobunaga's hands, he tied the kettle to his neck, went up the castle tower, set fire to gunpowder and blew himself up.

[Note that the bold type within the text is our choice and not that of the author.]

2) in black and white in 'Pictorial formulae of martial attributes in Kuniyoshi's warrior prints' by Elena Varshavskaya in Andon, September 1998, fig. 23, p. 19. Varshavskaya wrote on page 18: "Another print from the Taiheiki set, the subject matter of which deals at once with the appreciation of the arts and the final decision about a precious object in the last minutes of its owner's life presents Matsunaga Danjo Hisahide, called Matsunaga Daizen Hisahide in the print (fig. 23). An elderly man, his features distorted in a grimace, is ready to commit suicide; his belly is naked and the lower part of the blade of his wakizashi (small sword) is wrapped so as not to leave too long a part of it exposed. With his right hand he has just smashed a ceramic vessel to pieces. Everything looks like the familiar episode of a suicide of a loyal warrior preceded by the destruction of an heirloom. This, however, doesn't appear to be the case. The ceramic piece broken by Matsunaga had never been in the possession of his family, nor did it belong to any of his lords. The following story is told in Ehon Taikoki: Once there was a young man by the name of Matsunami who, though a peasant by birth, never liked the peasant's way of life, preferring gambling in which he had always been very lucky. A man of taste and ability, he gradually collected quite a number of utensils for the tea ceremony, the most valuable being the tea kettle called Hiragumo (a flat spider), which he had happened to buy at a market and had kept in a secret place ever since. Many a warlord wished to get this famous tea kettle but all to no avail. That was the time that he first harboured ambitious dreams, thinking of the example of the ruler of Mino, Saito Dosan, who once used to be an oil merchant and later became a noticeable political figure (he is portrayed in print no. 4 of the series of prints under consideration). Matsunami changed a character in his name and under the name of Matsunaga he started his service for the house of Miyoshi. This paved the way for his future career: at a certain time he was governor of Kyoto, and he ruled over the provinces of Kawachi and Yamato. He came to be known for a number of wicked deeds - records point at the death of shogun Yoshiteru, his contribution to the ruin of the Miyoshi clan and the burning of Daibutsuden in Nara among his major crimes. Once a retainer of Oda Nobunaga, Matsunaga rebelled against him but was defeated in his castle of Shigisan in Yamato in 1577. Not in strong health anymore but wishing to meet a warrior's worthy end, Matsunaga ordered a hundred moxa cauteries to be made, broke the famous Hiragumo vessel to prevent it from getting into Nobunaga's hands and killed himself. So Matsunaga, whose loyalty appears somewhat doubtful, is shown here as a true patron of the arts. Ill as his motives were, he did not forget about his refined treasure even on the verge of .death."

Matsunaga Hisahide (1510-77) was also known as Danjō. "Vassal of the Miyoshi, he sided in 1529 with Chōkei, entered with him into Kyōto (1549) became governor of that city, fought against the Sasaki, who supported the Shōgun Yoshiteru (1558), pacified the province of Izumi and constructed the castle of Shiki (Kawachi) (1560), from which place he governed the provinces of Yamato and Kawachi. He then received the title of Danjō-shōsuke (whence his surname of Danjō). In 1563, he posioned Miyoshi Yoshioki, son of Chōkei, and had Yoshitsugu declared his heir. Two years later, the Shōgun Yoshiteru having refused to name him Kwanryō in place of Chōkei, who had died the year before, Hisahide with his son Hisamichi, came to attack the palace of Nijō and Yoshiteru killed himself. Hisahide then named a child of two years Shōgun and ruled as he pleased. Soon after, a war broke out between himself and Miyoshi Yoshitsugu, but being attacked at the same time by Sasaki Yoshitaka, he made peace with Yoshitsugu. In 1568, he submitted to Nobunaga who named him governor (shugō) of the province of Yamato. A little later (1572), uniting his forces with those of Yoshitsugu, he revolted; defeated by Nobunaga, he abandoned his ally and thus contributed to the destruction of Miyoshi. In 1577, he was contemplating a new revolt; this time, Nobunaga sent his son Nobutada and Tsutsui Junkei to besiege him in his castle of Shiki. The castle was burned and Hishahide killed himself."