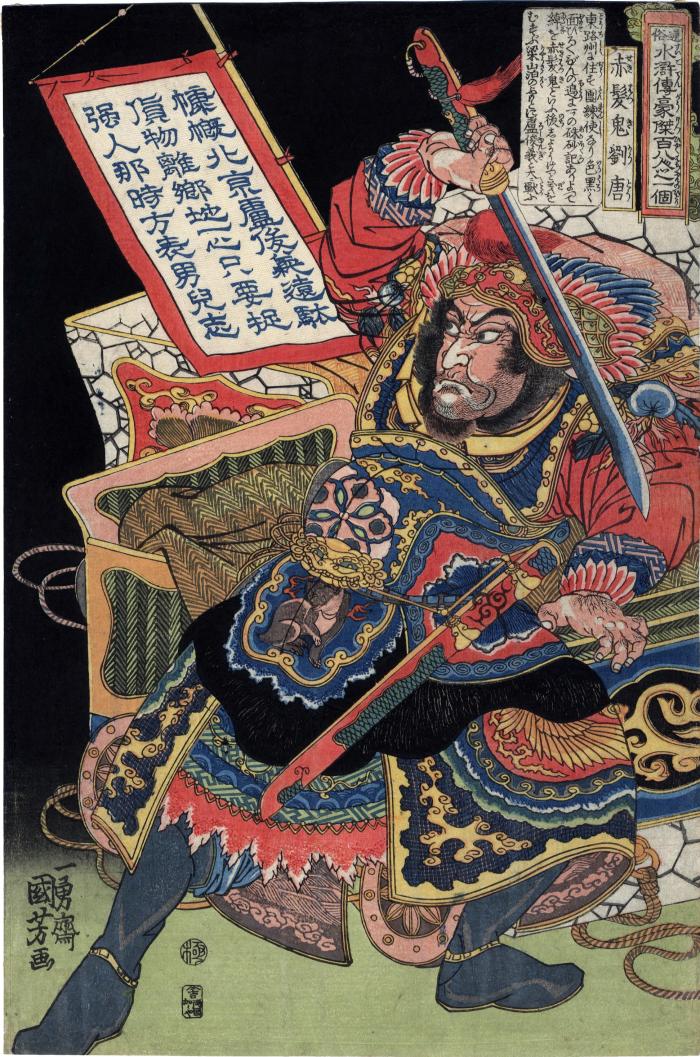 This print is the right-hand panel of a triptych of one of Kuniyoshi's Suikoden masterpieces. It is listed in Inge Klompmaker's Of Brigands and Bravery...", #39a. It is illustrated in color with a full page.

The background story of this figure is fun to read. Liu Tang first appears in Chapter 14 of Outlaws of the Marsh. From the outset there is a description of a large young man who has decided to sleep off a night of excessive drinking in the courtyard of a temple. Early in the morning the constable Lei Heng and his assistants discover him there and mistake him for a thief and tie him up and set off to carry him off to county magistrate. But first the group stops at the home of the local ward chief Chao Gai who is known to be a very generous man.

Chao Gai is awakened and greets his visitors graciously, offering them food and drink. While talking to Lei Hung he finds out why they are there and that the young man they had tied up is hanging from an rafter at the entrance to Chao Gai's house. After a while the host makes the excuse that he needs to go relieve himself but actually he goes to check out the prisoner. "Chao Gai pushed open the door and looked. The fellow was suspended high above the floor. His body was a mass of swarthy flesh, his dangling legs were black and hairy, his feet were bare. Chao Gai shone his lantern on the man's face. It was ruddy and broad. On the side of his temple was a scarlet birthmark from which reddish-brown hair sprouted."

The trussed young man explains that he is on mission to seek out one particularly righteous man, the Ward Chief Chao. He has come a great distance on this mission and is to reveal to this man a secret about great wealth. Chao plots with the young man and says, when I return with your captors pretend you haven't seen me this morning. Then pretend to recognize me as your uncle who you were on your way to visit. Then the constable will have to let you go.

After the young man is released and the constable and his men have left "Chao Gai took the young man to the rear building and gave him clotes and a hat. He asked his name and place of origin.

"Your servant's family name is Liu, my given name is Tang. My ancestral home is in East Luzhou Prefecture. Because of this scarlet birthmark on the right side of my temple, since childhood I've been known as the Red-Haired Demon."