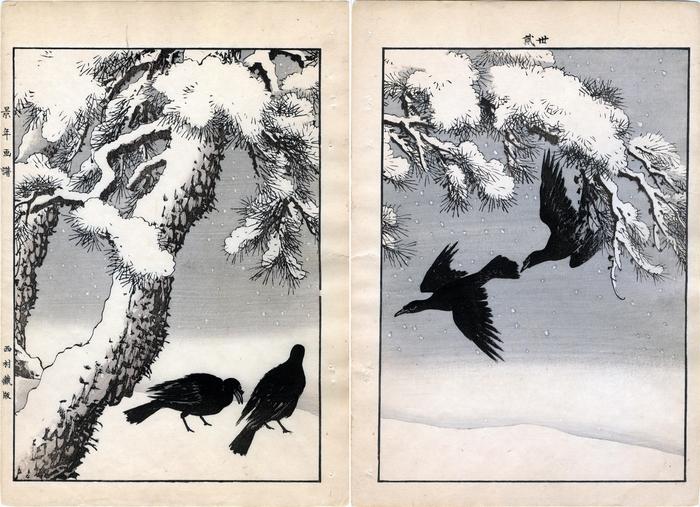 According to the Rijksmuseum the four volumes of this series each represent a season. This obviously would have been from the one devoted to winter.

"Black Pine under Snow, Large-billed Crow" from the Kacho Album: the Four Seasons.

The block carver is said to have been Tanaka Jirokichi and the printers were Miki Jinzaburo and Tanaka Harubei.

The number 30 appears at the top of the right-hand page.

Kacho-ga, or "bird and flower pictures," are among the most enduring and popular subjects of Japanese prints. Active in the late 19th and early 20th centuries, print artist Imao Keinen’s most celebrated work was his four volume set Keinen Kacho Gafu (Bird and Flower Albums by Keinen) published in 1891. Keinen Kacho Gafu is a collection of Japanese bird and plant portraits illustrating over 160 different birds in carefully selected, seasonal settings. Nearly every species of bird and flower ever to be depicted in the genre of kacho-ga is represented in Keinen's album.
kachō-e (bird and flower picture - 花鳥絵) (genre)
picture book (ehon - 絵本) (genre)
Nishimura Sōzaemon (西村藏版) (author)