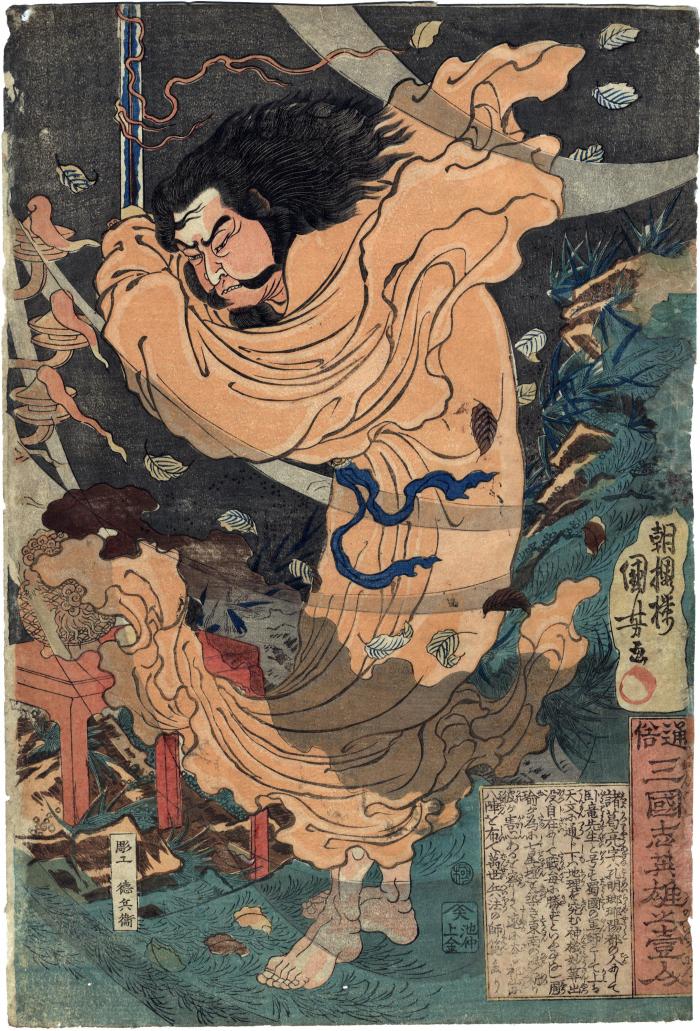 In The Romance of the Three Kingdoms Chou Yu "...was seized with sudden illness as he watched the fleets of his enemy." His illness? He was sick with worry, but K'ung Ming (Kōmei) came to him and said he could solve their predicament by summoning up a southeastern wind which would give Chou Yu the advantage.

K'ung Ming told Chou Yu that he should build him an altar 9' high, the altar of the Seven Stars, with three steps, at a particular location and give him three days to bring up the southeastern winds which were extremely rare at this time of year. Dressed in Taoist robes K'ung Ming recited his prayers. It worked as you can see here in this print in the Lyon Collection.

There are two copies of this print in the Lyon Collection clearly from two different editions. Compare the two, especially Kōmei's robe.

Below is information on this character, Zhuge Liang, provided by The Encyclopedia Britannica:

Zhuge, to whom supernatural powers often are ascribed, has been a favoured character of many Chinese plays and stories. Legend states that Liu Bei, then a minor military figure, heard of Zhuge Liang’s great wisdom and came three times to the wilderness retreat to which Zhuge had retired to seek him out as an adviser. It is known that Zhuge helped Liu organize a large army and found a dynasty. Liu was so impressed with Zhuge’s wisdom that on his deathbed Liu urged his son to depend on Zhuge’s advice and urged Zhuge to ascend the throne himself if the prince were unable to rule.

A mechanical and mathematical genius, Zhuge is credited with inventing a bow for shooting several arrows at once and with perfecting the Eight Dispositions, a series of military tactics. In the Sanguozhi yanyi (Romance of the Three Kingdoms), the great 14th-century historical novel, Zhuge is one of the main characters; he is portrayed as being able to control the wind and foretell the future.

1) with a very small image in color in Samurai Stars of the Stage and Beautiful Women: Kunisada and Kuniyoshi, Masters of the Color Woodblock Print by Hatje Cantz, Museum Kunstpalast, p. 270, #168.

Cantz wrote: "Komei (Chinese: Zhuge Liang, 181-234) from Sichuan, also referred to as Master 'Sleeping Dragon,' was a naturalist and 'teacher of the art of war for ten thousand generations.' Chinese warfare was weather-oriented, and Komei thus prayed at the altar of the Seven Sisters (the god of war) for a favorable wind form the southeast."