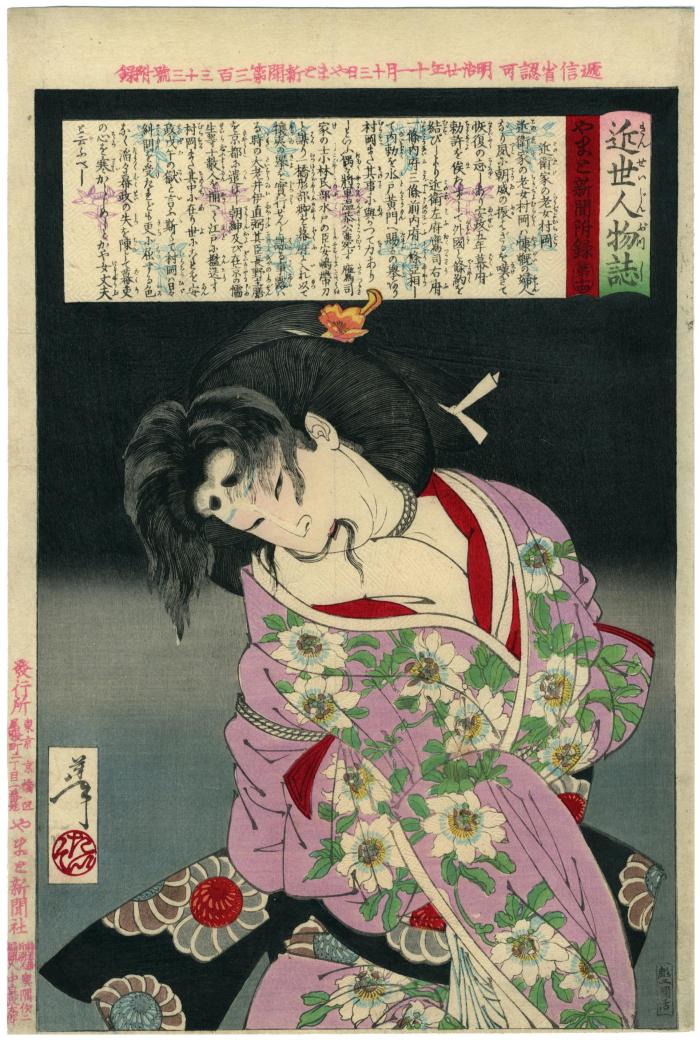 Muroaka was a head mistress of House of Konoe (近衛家の老女村岡) who actively advocated against the government. This print was insert No. 14.

2) In color in a full-page reproduction in Yoshitoshi: The Splendid Decadant by Shinichi Segi, p. 57.

"Edo period color woodblock print with an image of a woman, bound, with hair in her mouth. Over the two-year period from 1887 to 1888, Yoshitoshi produced his last and most accomplished set of "newspaper prints" as supplements to the Yamato newspaper. Muraoka (1786-1873) was a supporter of the loyalist faction that disagreed with the shogunate's new open-door policy. She was arrested and severely tortured in 1858 during the Ansei Purge. Her unbroken loyalty won her considerable acclaim once the shogunate fell. However, Yoshitoshi's depiction of Muraoka borders on sadomasochistic fantasy: bound with ropes she looks seductive rather than distressed, and she looks far younger than the seventy-or-more years she would have been at the time."

There had been a prohibition against portraying contemporary events prior to the Meiji Restorations. However, in the 1870s newspapers began to appear with some degree of impunity. Sarah E. Thompson noted in Undercurrents in the Floating World: Censorship and Japanese Prints on page 88 that a special kind of nishiki-e known as 'newspaper prints' also began to appear. "Although these prints derived their content from the newspapers, they were printed and sold separately. They may sometimes have been used as color supplements for the "small" newspapers aimed at a popular audience. A typical "newspaper print" included a logo with the name of the newspaper, a text derived from a recent article, and an artist's imaginary rendition of the scene. The articles selected for illustration were often tales of exemplary moral behavior, but they also included lurid crime scenes and even ghost stories related as factual events."
Meiji era (明治時代: 1868-1912) (genre)
Historical - Social - Ephemera (genre)