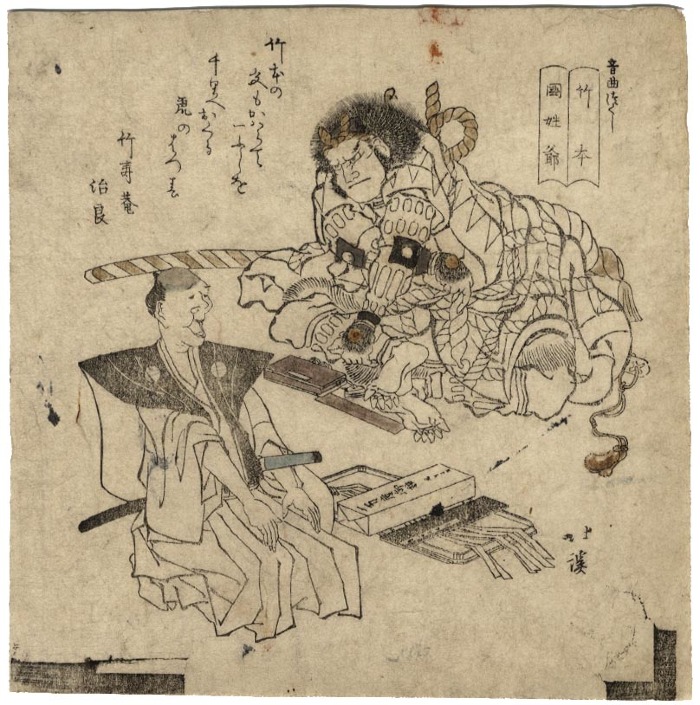 Takemoto; Kokusenya - Watōnai with a chanter of the Takemoto school

This is an extremely rare surimono woodblock proof print. The figure of Watōnai is wearing a headband made up of an anchor rope or ikarizuna (碇綱). Often this character is dressed in a robe decorated with an ikarizuna pattern as he is here.

There is a finished, colored copy of this print illustrated in Reading Surimono: The Interplay of Text and Image in Japanese Prints edited by John T. Carpenter, p. 204. The text on page 203 reads:

"A Jōruri chanter of the Takemoto school is juxtaposed with Watōnai, the main character and hero of the puppet drama Kokusenya kassen (The Battles of Coxinga; 1715). The play was written by Chikamatsu Monzaemon (1653-1725), loosely based on the life and adventures of the Chinese general Coxinga (J. Kokusenya; C. Guoxingye, the nickname of Zheng Chenggong; 1624-62), who opposed Qing rule and eventually became ruler of Taiwan. In the play, Watōnai whose name implies 'between China and Japan', is a son of a Japanese mother and Chinese father. He is born in a Japanese fishing village and is raised as a fisherman but eventually travels to the continent, receives the name Kokusenya, repels Qing forces in a series of battles, and restores the Ming emperor to the throne. The playwright wrote several dramas specifically for the renowned chanter Takemoto Gidayū (1651-1714).

In the poem, iro refers to the 'colour' of bamboo (take, as part of Takemoto), as well as the 'tone or chanting style' (fushi no iro) of hte Takemoto school. In the context of Jōruri, iro means a special style between chanting and monologue."

I would miss
the first and second months,
name Tarō and Jirō,
and hope that spring
does not move to China.

Without changing
the Takemoto tenor,
a song is sent as far
as a thousand leagues
in early spring of the tiger.