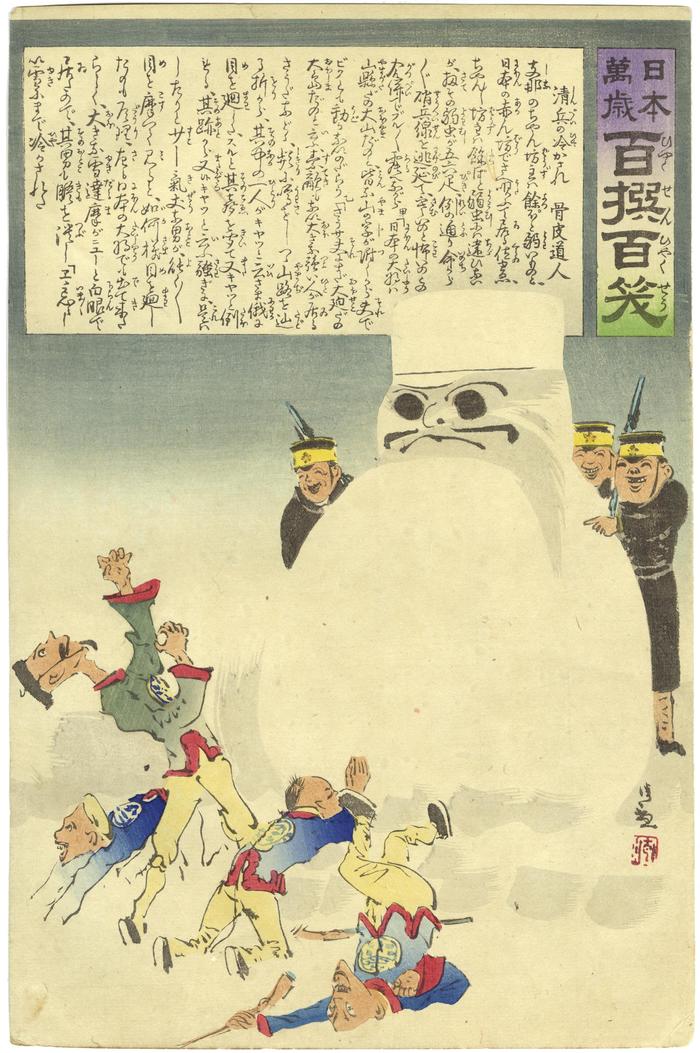 02/1895
9.4 in x 14.1 in (Overall dimensions) Japanese woodblock print
Signed: Kiyochika
Publisher: Matsuki Heikichi
Calligrapher: Nishimori Takeki
Museum of Fine Arts, Boston
Waseda University The title of this design utilizes a play on the meanings of hiyakasu, “to chill” or “to laugh at.” The series title, literally “One Hundred Selections, One Hundred Laughs,” is a pun on the expression “One Hundred Battles, One Hundred Victories” (both pronounced “Hyakusen hyakushô”).

Quoted from the Museum of Fine Arts, Boston web site.

Sarah Thompson in Undercurrents in the Floating World: Censorship and Japanese Prints wrote on page 91: "The Japanese soldiers of the Sino-Japanese War prints, in their elegant European-style uniforms, are rather unrealistically contrasted to grotesque pigtailed Chinese in gaudily colored costumes, who clearly represent the forces of backwardness. Little sympathy is shown for the plight of the enemy, except in a few instances illustrating the nobility of Japanese officers who display a patronizing compassion toward the Chinese."

Thompson continued: "In addition to the triptychs, another category of prints dealing with the wars were humorous single-sheet prints exemplified by Kiyochika's series Nihon Banzai - Hyakusen Hyakushō (Long Live Japan: One Hundred Victories, One Hundred Laughs). The series was originally produced in 1894-95, with a new series using the same title and format in 1904-05 [for the Russo-Japanese War]. Texts by Koppi Dōjin (pseudonym of Nishimori Takeki, [西森武城] 1861-1913), a writer for Marumaru Chimbun, were paired with cartoons by Kiyochika. Thanks to these texts, the meaning of the pictures is much easier to decipher than in the case of the "Kiyochika Punch" series of 1881, but the complicated puns, both verbal and visual, are very difficult to translate. The usual point of the humor is the weakness and cowardice of the enemy..." (Ibid.)

There is another copy of this print in the St. Louis Museum of Art.