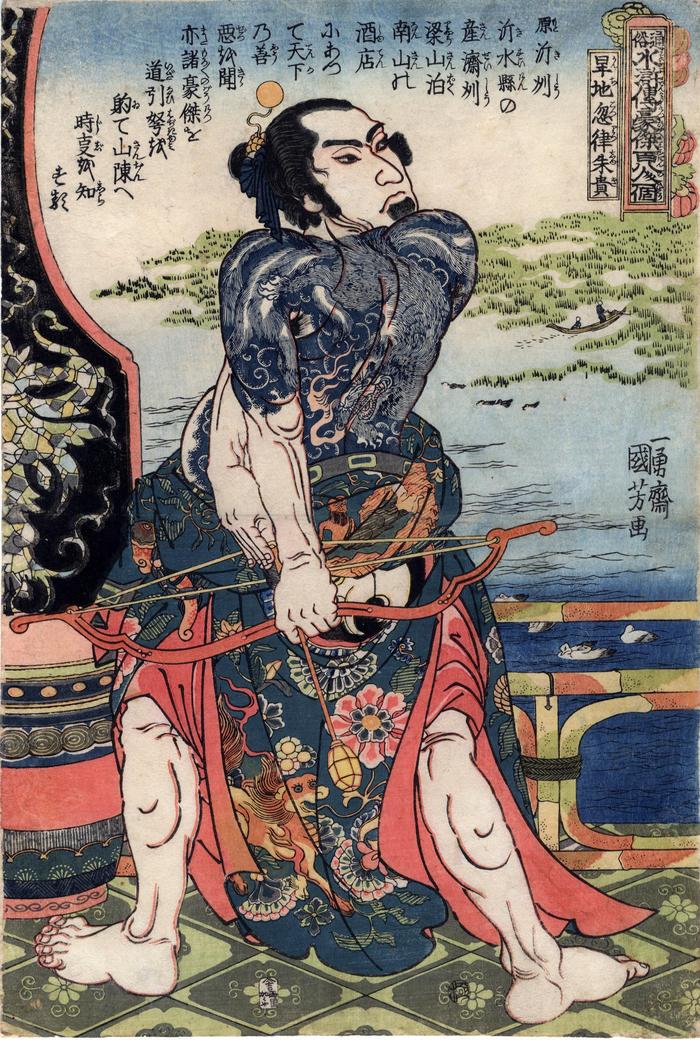 This is number 7 in Klompmakers' book on this series. It is also used on the front of the dust jacket.

Shuki is the owner of an inn near the headquarters of the band of brigands. He acts as a spy on their front lines. When he knows of a particularly vulnerable rich merchant he sends a special arrow in the direction of his cohorts' camp and they come and rob the man. When he or the group are threatened he also send one of his noise-producing arrows and the group jump into action.

"At times brutal, Shuki is known to murder travellers himself and sell their flesh as meat and their fat as lamp fuel. [Later he] becomes one of the captains of the Ryōsanpaku gang..." Source and quote from: Of Brigands and Bravery: Kuniyoshi's Heroes of the Suikoden, p. 54.

This passage is translated in the 2013 Kuniyoshi book by Iwakiri and Amy Reigle Newland:

Hailing from Motokishū, Kisui [Ch: Yishui] county, he had a sake shop at Nanzan [Ch: Nanshan] on the Ryōzanpaku marsh in Seishū [Jizhou] province, where he hears all the gossip and welcomes the many heroes. He shoots arrows as a signal to the [gang's] base on the mountain, thereby informing the mountain camp about what is going on.

We first encounter Zhu Gui in Chapter 11 of the Outlaws of the Marsh, p. 176:

"You are one of them and I didn't know," Lin [Chong] exclaimed. "I 'had eyes and didn't recognize Mount Taishan!' Please tell me your name." He bowed politely.

The man returned the bow. "This humble person is the lookout for Chieftain Wong. I am called Zhu Gui. I come originally from Yishui County in Yizhou Prefecture. Among the fraternity I'm known as the Dry-Land Crocodile. In the guise of running this wine shop my jobis to observe the movements of merchants and travellers. I let the stronghold know if they are carrying anything of value. When you asked about Liangshan Marsh I thought I'd better find out more about you. Then you wrote your name on the wall, and I remembered people from the capital telling of your gallantry. I never thought we'd meet here today. Since lord Chai has written an introduction, Chieftain Wang is sure to welcome a man of your splendid reputation."

Zhu Gui feasted Lin with a meal of fish and meat and wine and delicacies. They ate and drank in the waterside room till half the night was gone."

There are other copies of this print in the Ota Memorial Museum of Art and the Ishibi Prefectural Museum.

We know that this print was published over time by two different publishers. One was Kagaya Kichiebei and the other Ibaya Senzaburō. We have compared the prints produced by both houses and feel that on looks alone the one by Kagaya Kichibei is the earlier of the two. This is confirmed by the fact that the example in the British Museum, published by Ibaya Senzaburō, shows a seal only used in 1847, according to Andreas Marks.

2) color in Kuniyoshi: Japanese master of imagined worlds by Iwakiri Yuriko with Amy Reigle Newland, Hotei Publishing, 2013, p. 35, pl.11. "Kuniyoshi depicts the hero with a magnificent tattoo of a nine-tailed fox on his back; however, no mention is made of this body decoration in the original Water margin tale. The wall to the left is ornamented with what is meant to be mother-of-pearl."

3) a full-page color reproduction in Gems of the floating world : ukiyo-e prints from the Dresden Kupferstich-Kabinett by Rose Hempel, Japan Society, 1995, pp. 130-131. Hempel gave the title ending with 'Portrayed Individually' rather than 'All Told'. She notes that his hair is held back by delicate hair ornaments. Like other sources, she notes that he was running a winery.

Hempel wrote: "Kuniyoshi began this series in 1827. The stage had been set for it in 1805, when the Japaneses writer Takizawa Bakin (1767-1848) published a Japanese version of the Chinese novel Shuihuchuan (Suikoden) by Shih Nai-ngan, which takes place in the 11th century. It was a sensational success due to Hokusai's illustrations. B. W. Robinson describes Kuniyoshi's woodblocks: "They give the impression of an almost superhuman release of energy; the contorted figures with their strange and terrible weapons seem to burst from the confines of the ōban-sheet. It is no wonder that the public responded with enormous enthusiasm, urging the artist on till he had completed over seventy of these masterful designs." "
warrior prints (musha-e - 武者絵) (genre)
Suikoden (水滸傳) (genre)
Kagaya Kichiemon (加賀屋吉右衛門) (publisher)