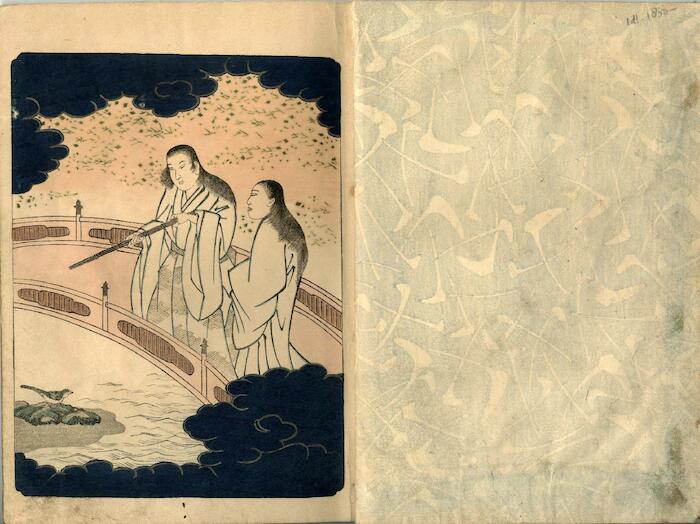 The deluxe shunga album, Ama no Ukibashi, 'The Floating Bridge of Heaven' [天浮橋]

A luxuriously printed shunga album with one single and six double (oban) pages of color illustrations and thirty-one pages of text. The quality of the printing is superb with extensive use of shomen-zuri and metallic pigments and is unusual in having one image of homosexual lovemaking with a young actor dressed as a courtesan. Ex Pulverer collection.

The cover shows the brother and sister deities, Izanagi and Izanami, standing on the sky-bridge, ukibashi, right after they created the first of the islands of the Japanese archipelago. Izanagi has dipped his spear in the waters below and when he pulls it back the first drops form the first island, Onogorojima. With this, the two gods descended to the new island and erected a huge column around which they both walked. This led to a conjugal 'event', the first of its kind. The first result was the birth of the leech-child which they set afloat on the waters. Later attempts were more successful. The resulting off-spring were all of the gods of Japan and the Imperial lineage.

#2 of 7 A courtier making love to a woman who is wearing a ceremonial headdress composed of silver flowers. Their bodies are almost entirely covered by elaborate and expensive clothing. Only parts of their genital region, their faces and part of his right hand supporting her covered left thigh are visible. Our guess: it is most likely winter, late autumn or early spring. Too cold to go uncovered.

As noted above, this volume was said to have been previously owned by Gerhard Pulverer, who put together one of the finest collections of traditional ehon. This particular volume entered the Lyon Collection in 2002.

We mention this because there is another copy of volume 1 of the Ama no Ukabishi for sale from an extremely reputable and knowledgeable dealer and their copies differs from this one when it comes to #s3, 4, 5 and 6 of 7. Only #'s 2 and 7 are the same.

Attribution is a scholar's game: Jack Hillier in vol. 2 of The Art of the Japanese Book on page 907 deals with the question of attribution of the Ama no Ukibashi. As most people know, shunga prints are rarely signed with an artist's commercial name. They are printed outside of the censorship laws, but appear to have been created by nearly all of the most famous artists - almost without exceptions. However, the quality of this series of prints, signed 'Ikkasai Sukinobu', is unmistakable.

Hillier wrote: "The frequent lack of signature, or the use of unrecognizable pseudonyms, has led to a considerable residue of books that are claimed for more than one artist. This is the case in regard to a handsome three-volume ehon entitled Ama no Ukibashi, 'The Bridge of Heaven', of that phenomenally complex printing that seems to have been reserved for shunga at this period. (In this case, the 'Tiger year' is mentioned in the book; this could conceivably be either 1830 or 1842.) As regards the artist, Empon Mokuroku, the standard bibliographical list of erotic books, gives Toyokuni II, whereas Hayashi Yoshikazu, the leading Japanese authority on shunga, opts for Yanagawa Shigenobu, expressing the view that the signature Ikkaisai Sukinobu in the book points to that artist, as well as the style. Neither of these two contenders can be accepted with complete conviction, but on balance probably Shigenobu is the more likely."

[The bold type in this last sentence is our choice in order to stress the difficulty of attribution on this point.]

Also illustrated in color in Hayakawa Monta's "Who Were the Audiences for Shunga?", on page 48 of Shunga: sex and pleasure in Japanese Art, Hotei Publishing, 2013.

"In this prefatory illustration to a deluxe shunga publication, the native deities (kami) Izanagi (male) and Izanami (female) stand on the 'floating bridge of heaven' of the title, looking down at the wagtail whose twitching tail suggest to them the techniques of lovemaking. As recorded in the most ancient written histories, Kojiki (Records of Ancient Matters, AD 712) and Nihon shoki (Annals of Japan, AD 720), the heavenly conjugation of these male and female deities gave birth both to the islands of Japan and to other major deities, then to the imperial line that continues to this day... Their very names mean 'male deity who invites' and 'female deity who invites'. To be more exact, Izanagi stirred his jewel spear in the primordial sea and the dew which dripped from its tip formed the island of Onokoro-jima, to which the deities presently descended. Artists Shigenobu's manner of depicting the white-robed deities in an ill-defined clould-world goes back at least one hundred years. There is a hanging-scroll painting by Kyoto artist Nishikawa Sukenobu, probaby dating from the Kyōhō era (1716-36), which shows them in a similar setting (Burke Collection, New York)."