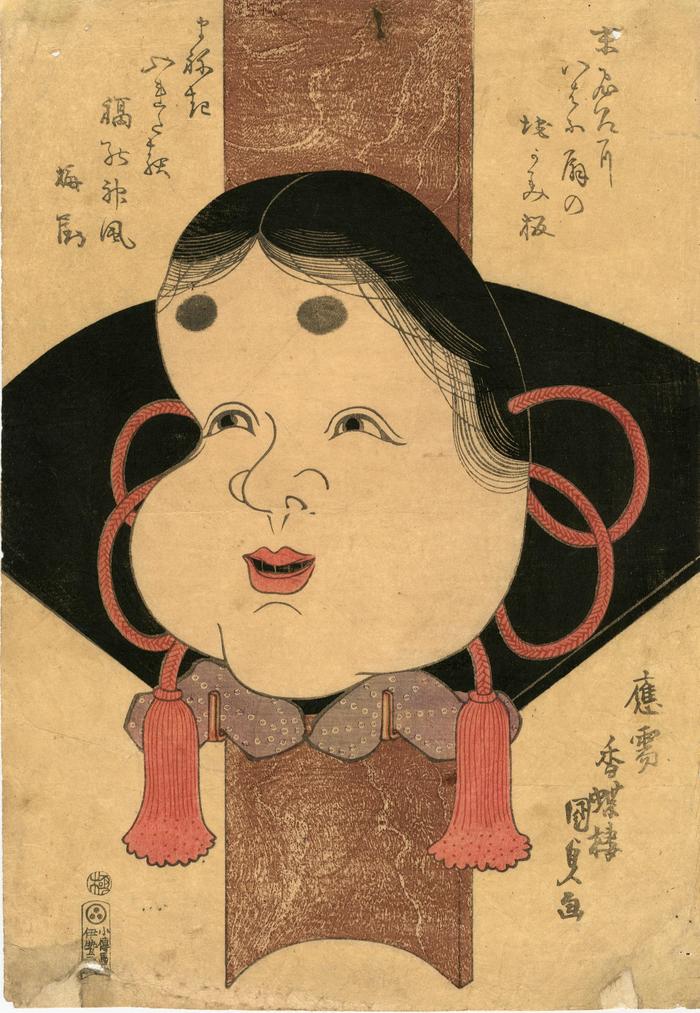 Otafuku as a wall ornament


"Otafuku is considered to be a reincarnation of the Shinto deity Uzume Mikoto, who helped to lure the sun goddess, Amaterasu, out of a cave during a dramatic eclipse sequence, as revealed in the Nihongi. In Tokyo, people carried pictures of Otafuku around on bamboo rakes during the festival of Tori no Machi at the three shrines called O Tori Jinja during the days of the Cock in the eleventh month. During the festival, people bought ornamental rakes and used Shinto symbols to attract good luck for the coming year. On these days the back gate of the Yoshiwara pleasure district would be thrown open."

Quoted from: The Sound of One Hand: Paintings and Calligraphy by Zen Master Hakuin, fn. 59, p. 266.

"Oto, or Otafuku, is a modification of Okame [the figure who lured Amaterasu out of the cave]... A character found in Kyōgen after the fifteenth century. Otafuku is a term, with a vulgar connotation, usually applied jokingly to 'big' women. Kyōgen masks tend to emphasize one particular aspect of facial characteristics, and in this case the exaggeration of the cheeks and mouth results in a grotesque parody of female beauty."

Quoted from: Netsuke: Masterpieces from the Metropolitan Museum of Art by Barbra Teri Okada, p. 70.

"Uzume-no-mikoto, more fully Ama (or Ame)-no-uzume-no-mikoto 天鈿女命, is also referred to as "Otafuku." She often regarded as the first "dancing girl" in Japanese history, the goddess of fertility, joy, and revelry who danced before the celestial cave to lure out the sun goddess when the latter had taken refuge there, bringing darkness upon the land. She also appeased (and later married) the fierce god (and leader of earthly gods) Sarutahiko (or Sarudahiko), who finally gives up his realm. The Otafuku mask is a common folk mask, with constantly smiling eyes. This mask is often paired with the male Hyottoko mask in comic dances during local harvest festivals."

During the Edo period a game called fuku-warai (福笑い), a kind of blind man's buff, was played where children, generally, would wear a mask of Otafuku/Okame. The mask would have slits at the eyes, but the children wearing the mask were supposed to have their eyes shut. Another version of this game involved pasting the parts of a face all over a mask in the wrong places. The purpose was to make the participants laugh. They did.

In some districts of Japan the name Okame could also mean a prostitute.

Illustrated in color in A Special Exhibition of Japanese Woodblock Prints: Ukiyo-e from Tadashi Goino's Collections (日本浮世繪兿術特展: 五井野正先生収藏展), National Museum of History [Taipei], 1999, 75. This catalogue entry for this print says:

Otafuku as a wall ornament

A mascot board in combination with a mask of otafuku and a fan. Otafuku means a moonfaced and smiling woman with a prominent forehead and plump cheeks. The word otafuku itself means 'full of good luck' in Japanese, so people thought it would bring them good luck. This shape has been used for happy events since ancient times because prosperity and good luck increases as time goes on. This is similar to the board widening towards the end. People prayed for their happiness by hanging the otafuku and board on the wall. "Let's celebrate the worshipping board, which widen towards the end. Then it will invite the God wind as good luck." Suehiro ni/iwau ogi no/ogami-ita/maneki iretari/fuku no ka

You will notice Otafuku's eyebrows sit high up on her head near her hairline. Married woman at one point would shave off their eyebrows and replace them with 'fake' brows painted above where the original eyebrows had been. Male courtiers would do this too in earlier times. In the case of this print, the new eyebrows are printed with metallic ink and are not black.