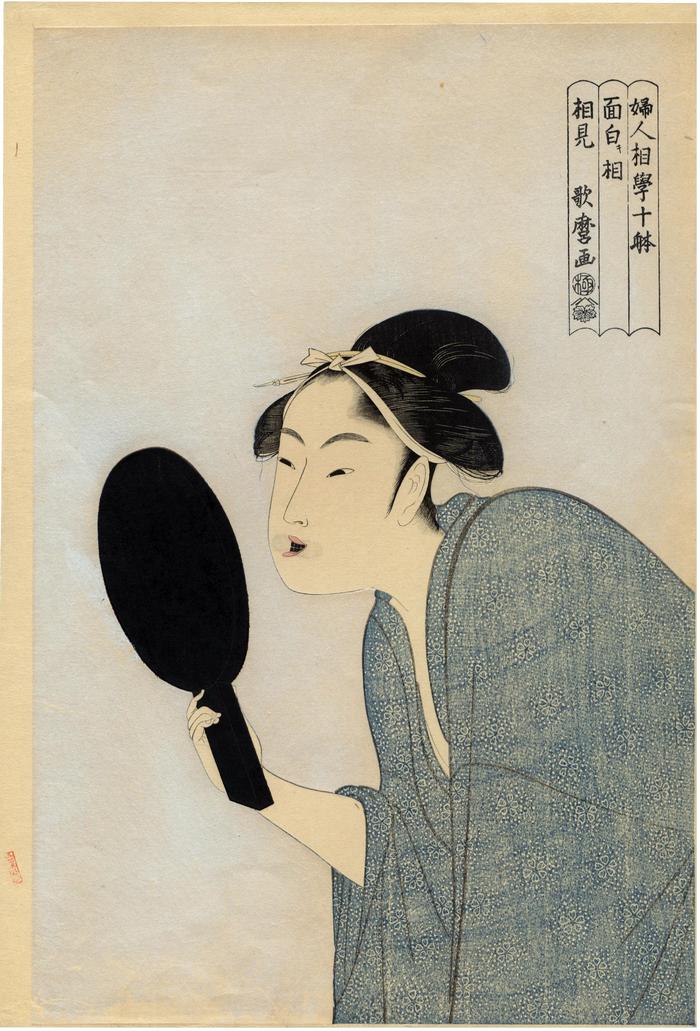 In homage to Utamaro, Goyō carved new blocks for the series Fujo Ninso Juppin. He did a magnificent job, but alas the sheer cost of his luxurious production proved too much for the publisher and the project was abandoned after only a few impressions were taken.

"Goyō's interest in ukiyo-e, already tangible... blossomed during the last decade of his life. He studied the large ukiyo-e collection of a relative, Mihara Shigekichi. He also put together his own collection of prints, assembling many works by Utamaro and Hiroshige, which he later exhibited at Tokyo Imperial University in 1916 and at Watanabe's shop in 1918. His research into ukiyo-e yielded a number of studies... [he] published a three-part article on Hiroshige in 1914, another three-part article on the golden-age of color prints in 1915, and a massive ten-part article on Utamaro in 1915 and 1916. Beginning in 1916, he contributed monthly articles to Ukiyo-e magazine, including one for the commemorative issue on Utamaro in 1916. He also wrote commentaries for a republication of Hiroshige's Edo kinkō hakkei (Eight views of Edo suburbs).

Goyō's interests extended to selecting and overseeing the reproduction of prints by ukiyo-e masters. Like Watanabe before him, he intended these recuts, not as forgeries, but as means of preserving a great native art form that over the previous generation had been collected and prized primarily by Westerners. In November 1917, together with Kiyokata, Goyō selected (and wrote commentaries for) a variety of masterpieces in the twelve-volume Ukiyo fuzokū yamato nishiki-e (Ukiyo customs and Japanese color prints), published by the Nihon fuzokū zue kanōkai (Association for publication of pictures of Japanese scenery).... In sum, despite the fact that he neither cut nor colored his own blocks, it is hard to imagine any print artist more serious than Goyō. His technical and historical study of ukiyo-e, trainingin Western art, and devotion to high-quality production, set the stage for the creation of his own prints."

Quoted from: Shin-hanga: New Prints in Modern Japan, p. 47. The choice of bold type was our own.
beautiful women (bijin-ga - 美人画) (genre)