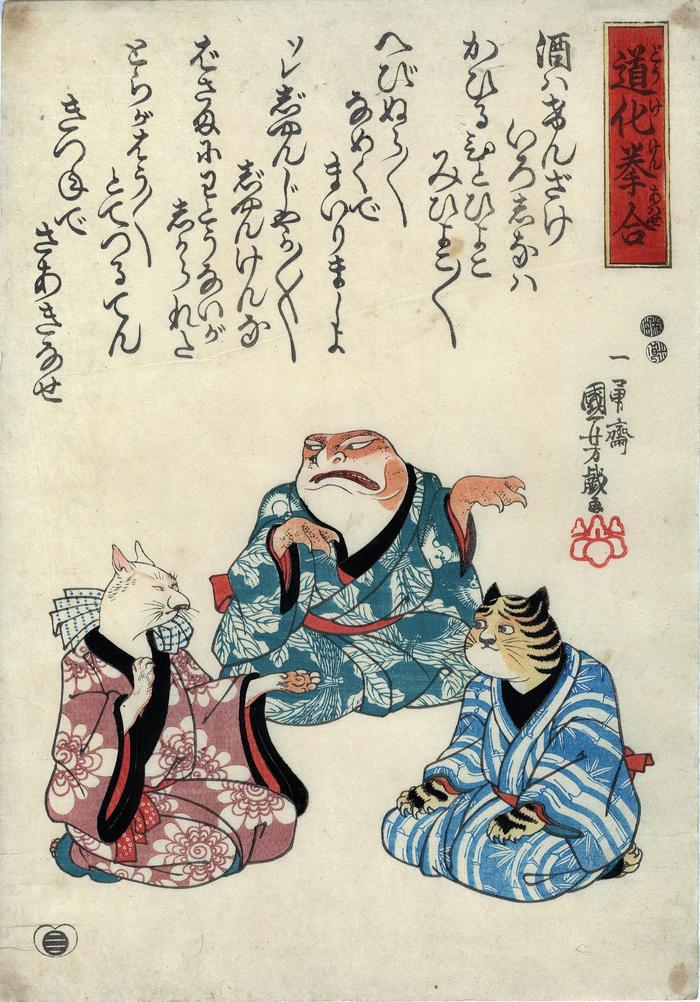 Caricatures of three kabuki actors playing a hand game, similar to "rock, paper, scissor." The writing at top names the animals in light verse and was to accompany the game. The actors were Nakamura Utaemon IV (1798-1852), Kinshō, and Ichikawa Kyūzō, who originally popularized the game of ken in the play Kurabe utate miwa no Aizuchi, played at the Kawarazaki Theater in Edo starting in the first month of 1847.

The inscription at the top as transcribed and translated by the University of Vienna:

Sake must be ken-zake, but there are different kinds.
The frog jumps once, jumps thrice.
The snake slithers along.
Let us take the slug!
Ding-dong, ding-dong, ding-dong – stone ken!
Watōnai was scolded by his old mother.
The tiger crawls forward to the sound of the shamisen.
Come along with the fox!

The University of Vienna continues:

"A fox, a tiger and a frog, dressed in kimonos, play kitsune-ken, each adopting a specific hand posture typical of kitsune-ken: The frog plays the fox, the fox plays the hunter and the tiger plays the village elder. The picture refers to the interlude Warau kado niwaka no shichifuku 笑門俄七福 (sevenfold luck with the dance at the gate of laughter), which was performed in the 4th year of Kōka (1847) in the course of the New Year's kabuki performance at the Kawarasaki theater and led to a big ken boom in Edo. The term derives from the song Sake wa kenzake 酒ハ拳酒, which accompanies the various ken games. It contains the onomatopoetic line totetsuruten トテツルテン, which imitates the sound of the accompanying instrument shamisen. Instead of its original title Warau kado niwaka no shichifuku, the dance piece was given the simple name totetsuru-ken.

The Fujiokaya Nikki contains an entry next to this print by Kuniyoshi which describes the immense popularity of the totetsuru-ken.