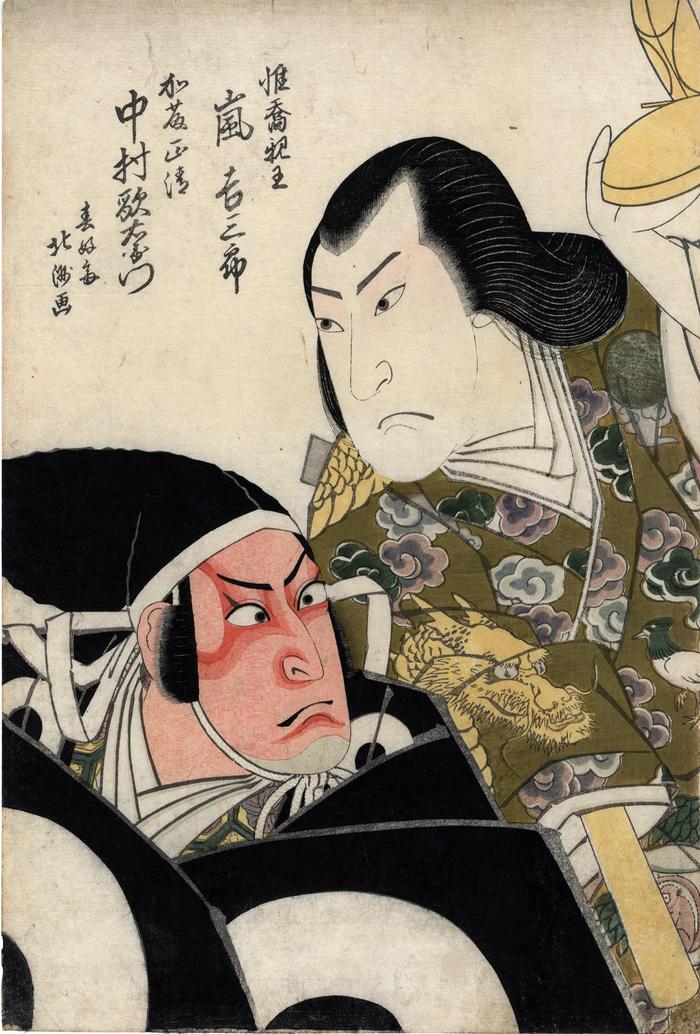 09/1820
10.25 in x 15.25 in (Overall dimensions) Signed: Shunkōsai Hokushū ga
春好斎北洲画
Museum of Fine Arts, Boston
Philadelphia Museum of Art
Metropolitan Museum of Art - 1794 Sharaku representation of Prince Koretaka
Kabuki21 - summary of the play Hachijin Shugo no Honjō
Royal Museums of Art and History, Belgium (via Cultural Japan)
Náprstek Museum
Rijksmuseum This is a curious composition because it places two major rivals of the kabuki theater together in one setting, but from two different plays. Kichisaburō from Toki wa Ima Ariwara Keizu (時再興在原系図) at the Horie theater and Utaemon in Hachijin shugo no honjō ('Eight Battle Arrays to Protect Honjō Castle' - 八陣守護城) at the Kado theater in 9/1820.

"Prince Koretaka... in brocade dragon robes and holding up a gold court cap, in the villainous role of an imperial prince who will stop at nothing to regain disputed succession to the throne. Katō Masakiyo... is a samurai role, the hero here dressed in voluminous formal black robes with white 'snake-eye' (janome) crest to receive Kitabatake (modelled on Tokugawa Ieyasu)..."

As Keyes notes there are perhaps three different editions of this print. The first was "...a special surimono-like impression, with metallic printing in brass to imitate gold... [This print in the Lyon Collection] "...is the normal printing in colour woodblock for general sale. Perhaps the special editions were printed at the request of patrons, who would then distribute them privately; alternatively, the patrons may have presented them to the actors to give as gifts." (Ibid.)

There is another print in the Lyon Collection showing a character from the play Toki wa Ima Ariwara Keizu. It is an Ashiyuki piece, #1173.

"Both actors were very popular rivals, but they did not act together for some twenty years. Utaemon III and Kichisaburo II are shown here together because they announced to have planned to act together in a play in the autumn 1821.

On this print the actors are shown in roles of different kabuki plays of 9/1820 and it must have been published at that time or somewhat later. Arashi Kichisaburō II changed his name 3/1821 to Kitsusaburō I, so the print is published before that date, since the actor's name on it is Kichisaburō....

The announced joint performance never took place, because of Kitsubaburō's sudden death in 9/1821." This is quoted from Ōsaka Kagami 大阪鏡 by Jan van Doesburg, p. 22.

The example shown in the van Doesburg volume has a publisher's seal for Oki. The examples in the Museum of Fine Arts in Boston and illustrated in Schwaab and in The Theatrical World of Osaka Prints by Roger Keyes show no publisher's seal.

On page 66 of Keyes' The Theatrical World of Osaka Prints it says: "This double half-length portrait was perhaps the first oban print of its type to be published in Osaka. There are at least three states of the print, although the order of their issue is uncertain. One has a yellow ground; one has an uncolored ground and some signs of wear; another with uncolored ground bears the mark of the publisher Tamaoki."

There are three prints in the Lyon Collection showing Utaemon III as Katō Masakiyo. Each shows him in the same dramatic costume and is said to date from ca. 1820. The other two are by Hokushū and Yoshikuni.

There is another copy of this diptych at the McMaster Museum of Art in Hamilton, Ontario.

3) color in Ukiyoe Museums in Japan (Nihon no ukiyoe bijutsukan - 日本の浮世絵美術館), vol. 5, p. 147. This example is from the collection of the Ikeda Bunko Library. They give the play title as Hade Kurabe Isemonogatari, Hachijin Shugo No Honjo.

7) In a black and white reproduction in Catalogue of the Collection of Japanese Prints Part V - The Age of Yoshitoshi, Rijksprentkabinet/Rijksmuseum, 1990, no. 206, p. 136.