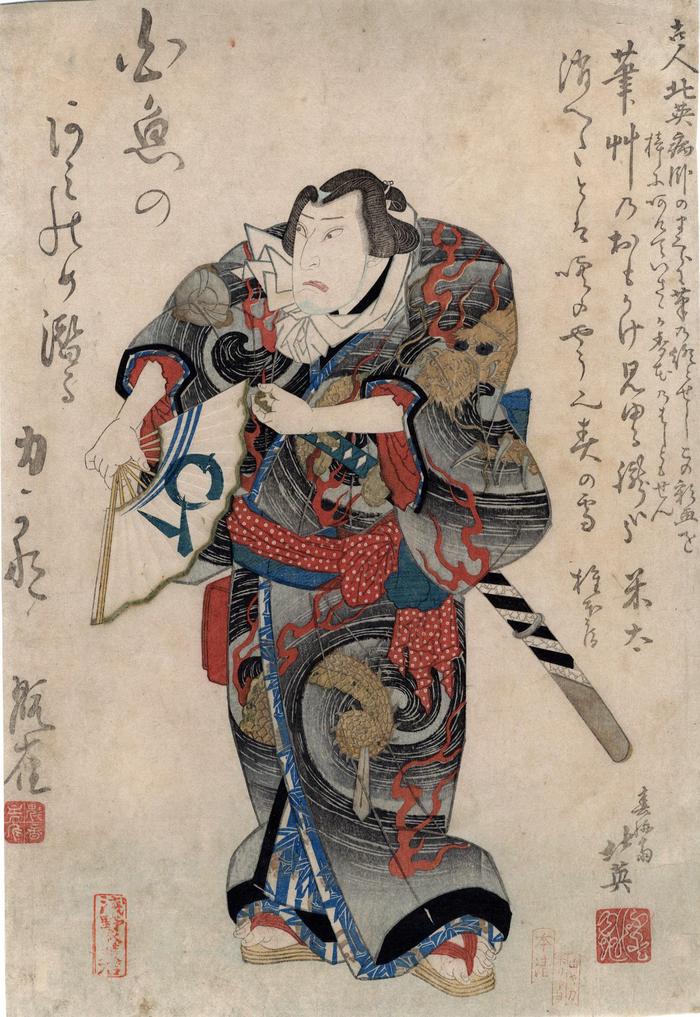 This print commemorates a production at the Kado Theater in 3/1836.

The original dramatization Sekitori senryō nobori (The Rise of the 1,000 Ryō Wrestler: 関取千両幟) was written in nine acts by Chikamatsu Hanji and others for the ningyō jōruri (puppet theater: 人形淨瑠璃), premiering in 8/1767 at the Takemoto Theater, Osaka. The first kabuki performance in Osaka may have been in 8/1775 at the Kado Theater. Two patrons of rival wrestlers attempt to raise money to ransom a beautiful courtesan, Nishikigi of the Osakaya, so they wager on a match between their wrestlers. Tetsugadake Dazaemon, fearing he will lose, asks Iwagawa Jirokichi to throw the match in exchange for his help in raising the money for Iwagawa’s patron. As this would guarantee the rescue of Nishikigi, Iwagawa agrees. His wife Otowa learns of the plot, however, and cannot accept that her husband would ruin his reputation for his patron. She therefore raises the money in secret by the only means available — selling herself to a brothel. As the wrestling match is about to begin, Iwagawa is told that an anonymous source has provided the money. He is therefore free to compete unfettered, defeat his opponent, and capture his ranking. After his victory, he is shocked to learn that the donor was his Otowa.

This shini-e (death print: 死絵) is one of the most admired of Osaka designs, and much sought after. It is based on a sketch for a performance early in 1836 that was turned into a shini-e by adding the various inscriptions. The block cutting and printing is especially fine, worthy of a memorial to an artist of Hokuei's stature.

The first two vertical lines of script on the far right read:

The late Hokuei painted this picture while on his sickbed. We offer this as a final farewell in memory of his work.

The middle verse on the right is signed "Yoneta." It is a paean to Hokuei’s skill as a print designer and employs an image from nature, as if Hokuei's talent were immeasurable like a great mountain peak viewed from far below:


A brush of great height
whose countenance appears
through a moonlit haze.

The left-most poem on the right side is signed "Shiimoto-an." It employs the conventional metaphor of fast-melting spring snow as a symbol for a brief life. Although we do not know Hokuei’s date of birth, it would seem from this poem and his brief working period that Hokuei died unexpectedly before his time:

The poem on the far left is signed "Kanjaku," the haigō of the actor portrayed in the print, Utaemon IV, whose seal appears under his signature. The fish escaping from a fisherman's net (ami) represents Hokuei, whose skill in designing prints is likened to the strength of a fish escaping through fine netting (which also recalls the strength of the wrestler Iwagawa). The shirauo (ichthyology: Salanx microdan) is fished at the beginning of spring, so this is a second reference to Hokuei's unexpected death (in late 1836) and the publication of the print (possibly the beginning of 1837). A second interpretation is possible for the signifier ami, which refers to the Taoist belief that "Heaven casts a wide net" through which nothing passes (corresponding roughly to the western concept of "As you live, so shall you reap."). Thus, Hokuei’s worldly artistic contributions have earned him his rightful place in the afterworld (that is, the net will no longer be cast to ensnare him for his sins) and no further retribution will be exacted, for he has gained salvation through his art:

With great power
the white fish passes through
the meshes of the finest net.

All told, this is a superb design with expressive poems mourning the passing of a much-admired artist.

"This is Hokuei's lst print and announces the aritst's death. Though the actor actually performed the role in 3/1836, we know that Hokuei was still producing prints until late 1836. Since the design includes three poems, all couched in terms of spring, these must refer to spring of 1837, suggesting the artist died during the winter. The last poem is signed by Kanjaku, the literary name of Utaemon IV, and bears his red seal. The inscription reads: 'We publish this picture, the last work of the late Hokuei, designed on his sickbed, in hopes of adding a small tribute to his memory'... Kuroda lists an impression of this print bearing the seals of Honsei, the block-cutter Yamaki, and the master printer Suri Toyo.... In any case, the design and printing must rank with the best of Hokuei's products. The brass dragon flaming among the carefully shaded whirlpools has silver eyes and claws, one grasping a silver pearl of wisdom."