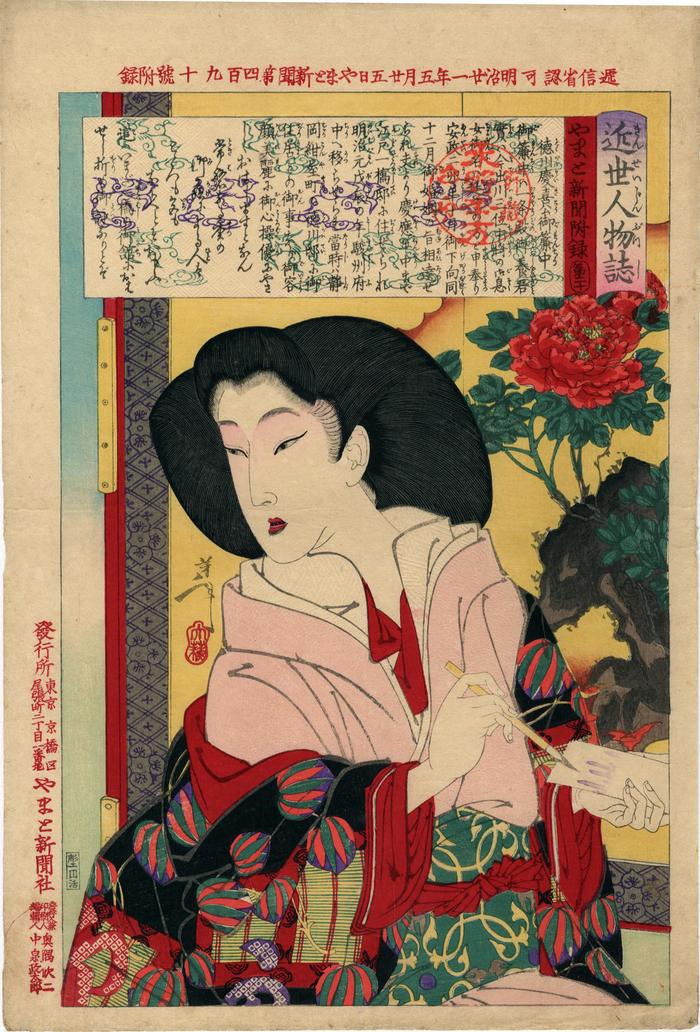 The wife of the last shōgun, Tokugawa Keiki (徳川慶喜公御簾中), number 20 (第ニ十), from the series Biographies of the People in the Recent Years (Kinsei Jinbutsu Shi - 近世人物誌)

The wife of the last shogun is writing a poem on a tanzaku paper. This is number 12 from the Yamato shinbun, i.e., newspaper, series.

"Over the two-year period from 1887 to 1888, Yoshitoshi produced his last and most accomplished set of 'newspaper prints' as irregular supplements to the Yamato Shimbun. The full set of twenty prints... was later bound in one volume, with the addition of a title plate... The series as a whole shows Yoshitoshi's mature style of figuration based on careful drawing from models. The linework is masterful, and the exactingly balanced choice of colors employs the bright, imported aniline dyes sparingly, as points of compositional accent. The subjects were people in the news, and persons who helped shape modern Japan."

Quoted from: Yoshitoshi: The Splendid Decadant by Shenichi Segi, p.132.

There had been a prohibition against portraying contemporary events prior to the Meiji Restorations. However, in the 1870s newspapers began to appear with some degree of impunity. Sarah E. Thompson noted in Undercurrents in the Floating World: Censorship and Japanese Prints on page 88 that a special kind of nishiki-e known as 'newspaper prints' also began to appear. "Although these prints derived their content from the newspapers, they were printed and sold separately. They may sometimes have been used as color supplements for the "small" newspapers aimed at a popular audience. A typical "newspaper print" included a logo with the name of the newspaper, a text derived from a recent article, and an artist's imaginary rendition of the scene. The articles selected for illustration were often tales of exemplary moral behavior, but they also included lurid crime scenes and even ghost stories related as factual events."

There is another copy of this print in the Pushkin State Museum of Fine Arts.