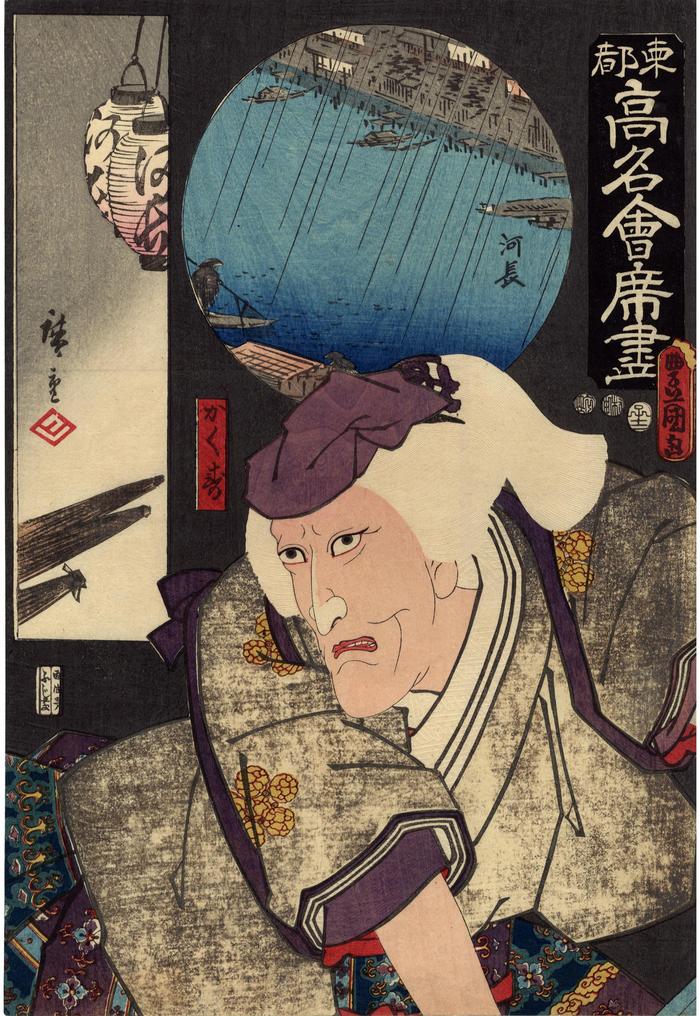 12/1852
9.5 in x 14 in (Overall dimensions) Signed: Toyokuni ga (豊国画)
Hiroshige did the insets - (広重)
Hiroshige's monogram seal in red on left: Hiro
Publisher: Fujiokaya Keijirō
(Marks 063 - seal 26-104)
Censors' seals: Murata, Kinugasa, Rat 12
Museum of Fine Arts, Boston
Waseda University
Tokyo Metropolitan Library
Ritsumeikan University
National Diet Library
Rijksmuseum
National Diet Library - main link to 34 images from this series in their collection
Hankyu Culture Foundation
National Museum of Japanese History (via Ritsumeikan University) Kakuju, in some references, is the sister of Sugawara no Michizane and in others his aunt. She is cast in one of the major roles in the kabuki play Sugawara's Secrets of Calligraphy (Sugawara denju tenarai kagami).

If you look closely at the upper left of this print, the one with Hiroshige's signature and seal, you will notice the name of the restaurant, Kawachō (河長), written on the lantern. Below that, at the bottom of the oblong, vertical cartouche are three closed umbrellas. These go with the round river scene in the rain seen above the actor's head. Supposedly the Hiroshige images in this series represent scenes seen in the neighborhood of the named restaurant on each print.

Notice the beautiful oxidation on the actor's robe.

There are 50 prints in this collaborative series. Not only does this series feature two of the greatest diversions of the Edoite population - fine dining and kabuki - but it gives us a who's who of great actors, performances and roles. A full study of this series would be extremely rewarding.

We should note that often the publisher is really the most important person involved in the production of individual prints and or sets. He was the one who had the greatest outlay in expenses. He hired the artists, the carvers, the printers to produce images on paper he had bought, using inks he had procured and then he marketed the woodblock prints himself. But, often that was just a few of the steps involved.

We know today that often prints were published basically as advertisements. They were commissioned to promote a product. In the case of this series it might have been two groups, working together, that commissioned these 50 prints: the restaurant business and kabuki actors - both major factors in the entertainment of your average Edoite. We may never know how this set of prints ever came about, but it would be a good guess that the cost of the production had been underwritten by these two major components of late Tokugawa life. And imagine the selling factor of a publisher going to potential client and offering the two top artists of their day, Hiroshige and Toyokuni III, working together to produce and image of their own restaurant paired with one of their favorite actors. A primo idea. But, until we know for sure, it is fun to speculate. (JSV)

Hiroshige's diamond-shaped lozenge seal in red below his signature on the left is made up of shapes which read 'hi' and 'ro'.