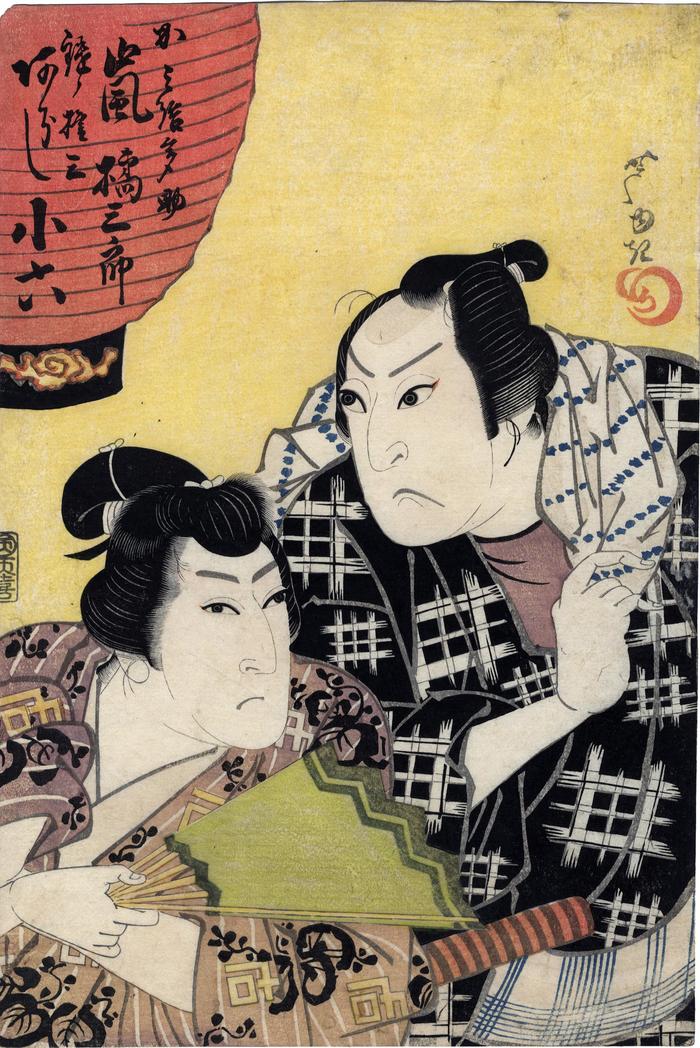 This print commemorates a performance at the Naka Theater in the eight month of 1824. The names of the actors and their roles appear on the lantern in the upper left.

The character of Yari no Gonza is from a work by Chikamatsu Monzaemon.

In 1986 a movie, Gonza the Spearman, was released. The plot summary by PastaQueen at IMDB.com says:

The tragic story of Gonza, a handsome ladies man, set in the Tokagawa Period, a time in which appearences are very important. Gonza competes with Bannojo for the honor to perform the tea ceremony to celebrate the birth of an heir to the lord of their clan. To see the sacred tea scrolls Gonza promises to marry the daughter of the family which possesses them, even though he is unofficially engaged to another. When studying the scrolls with Osai, the mother of the house, Bannajo sneaks into the house and steals their obis and runs through the town proclaiming the two as adulterers.

In Donald Keene's introduction to "Gonza the Lancer" he says:

"First performed on September 26, 1717. Chikamatsu modeled this play on events which occurred about six weeks before the first performance. He changed the names of the characters and removed the scene of the final action from the Kōrai Bridge in Osaka to the Capital Bridge in Fushimi. He further called the chief character Gonza, the hero of a half-century-old ballad, perhaps in deference to the feelings of those connected with the tragedy . The play is otherwise contemporary, and the audience undoubtedly saw through the thin disguise.

The play has a subtitle, "The Double Hempen Kimonos," suggesting that the action takes place in summer, when hempen kimonos are worn, and hinting at Osai's double love life."

Osai is the major female role in this play.