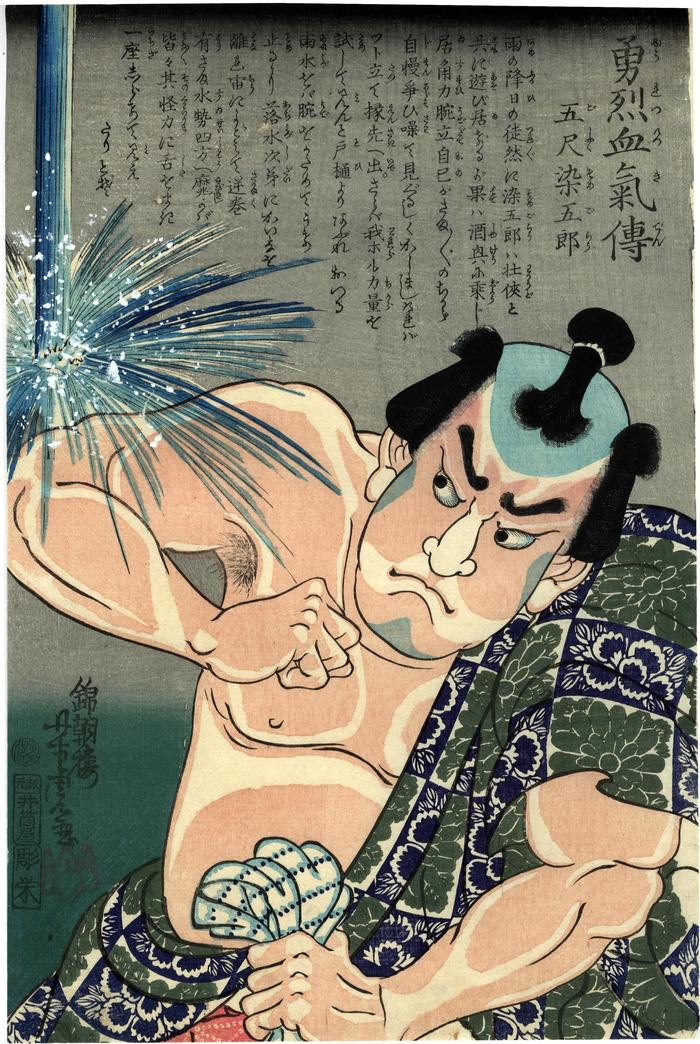 In 1845-46 Kuniyoshi produced a series of designs entitled Contest of Hot-blooded Heroes in Bold Patterns for the publisher Murataya Ichigorō, a firm which may have published its last print in 1853. Yoshitora, one of Kuniyoshi's students, exact dates unknown, may have started to publish independently as early as 1843. This would mean that he would probably been aware of the series produced by his master, including one similar to the example shown here.

In 1866 Yoshitora designed a spectacular set of prints for Izutsuya Shōkichi entitled Lives of Brave and Hot-blooded Heroes dealing with the same heroes of the earlier set by Kuniyoshi, but this time much more up close and personal. Kuniyoshi's figures were smaller, while Yoshitora's practically filled the sheet. And yet the similarities are obvious. Perhaps this was an homage to his teacher who died in 1861, while possibly attempting to out do the older artists works.

One difference between this print by Yoshitora and that of Kuniyoshi is the name of the figure seen here. Kuniyoshi called him Shiboro no Somegorō, but clearly in both example the same hero is indicated. (JSV)

There are two prints from this series in the Lyon Collection.

Goshaku Somegorō was a popular otokodate character of the kabuki stage and was represented in numerous prints by numerous artists. A few of those images are shown in links above.