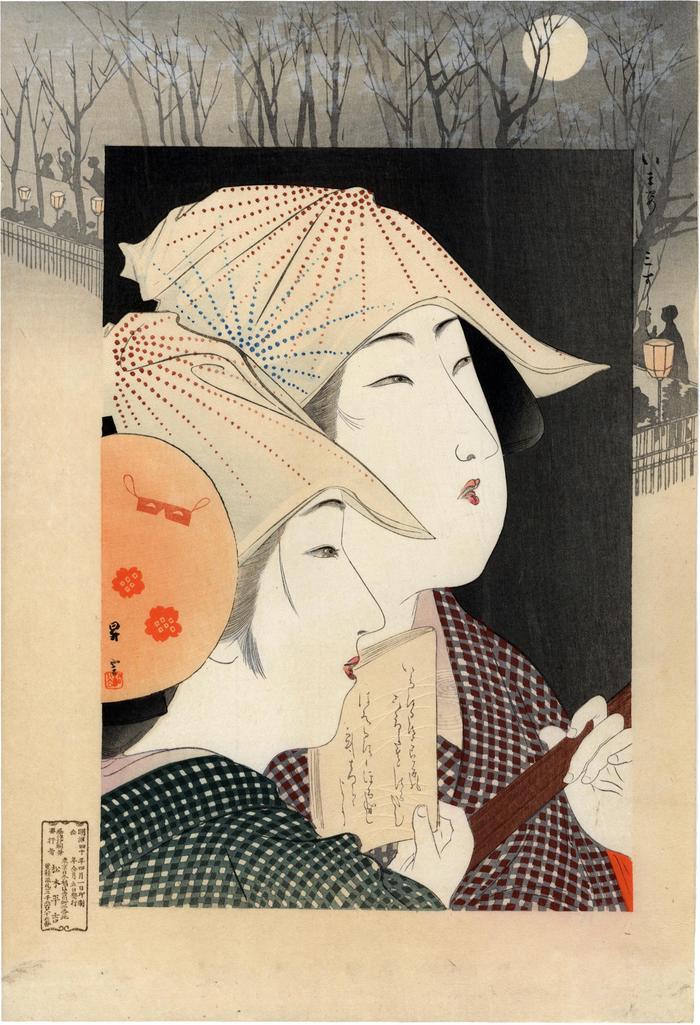 Shōun (昇雲: 1870-1965) was originally trained as a painter in the Kanō school tradition. “At about the age of 17 he went to Tokyo, where he supported himself by decorating porcelain...” etc. [Renoir, it should be noted, began his career as a porcelain painter at Limoges.] Later, after he saw an ad for an illustrator at a magazine he submitted some images which got him a job there.

Between 1906-09 Shōun produced the Fashions of today consisting of 15 busts and 13 half-lengths for the publisher Matsuki Heikichi. “In this series each beauty’s portrait is placed in a cartouche set against… a decorative background scene. This compositional device and style is reminiscent of the Ukiyo-e tradition. However, Shōun’s contribution as one of the last artists working in Ukiyo-e style has yet to be explored, but it has been suggested by Abe Setsuko (Andon, 1992) that this series: ’The subject matter of his prints was less formal and more realistic that [sic] in the earlier ukiyo-e prints and in this respect, they foreshadow the shin hanga of the Taisho period. Therefore if we take Shōun’s Imasugata as he turning point between Meiji-period ukiyo-e and Taisho-period Shin hanga (New prints), a deeper and more comprehensive understanding of the history of Japanese woodblock prints can be obtained. Apparently this series did not sell well, no doubt due to the increasing decline of the woodblock medium occurring at the turn of the century…”

Donald Jenkins wrote in the same volume (p.19) about a different print from this series, but one which could easily describe this example from the Lyon Collection: “…Shōun moves in close, inviting the viewer to become involved. Also, he offers us the hint of a story…. In this respect, the print is reminiscent of many kuchi-e. The way the figure is enclosed in a panel of its own, superimposed on the background, is a device that is also often found in kuchi-e. Shōun’s use of it here is highly original, however. There is a charming ambiguity about the way the two panels relate to one another spatially. “

The seal in the lower left indicates a date of Meiji 40, 4th month, 1st day. This would place its publication in 1907.

There are a couple of features the viewer should take note of. By enlarging this print the decoration of a mask on the globe of the lantern on the left becomes more noticeable. Also, look carefully at the beautiful areas of embossing on the book being held by the woman in the foreground. It looks like long stalks of grass bent by the wind. And look at the scarves covering the heads of both women. This publisher used a finely woven, gauze-like fabric to make these impressions. You will also notice that the trees as seen by the light of the moon plus some small lanterns is either in bloom or have leafed out. (JSV)

The title and subject, - いま姿 and 三すじ, are printed in black along the upper right near the top of rectangle that frames the two women's heads. (JSV)