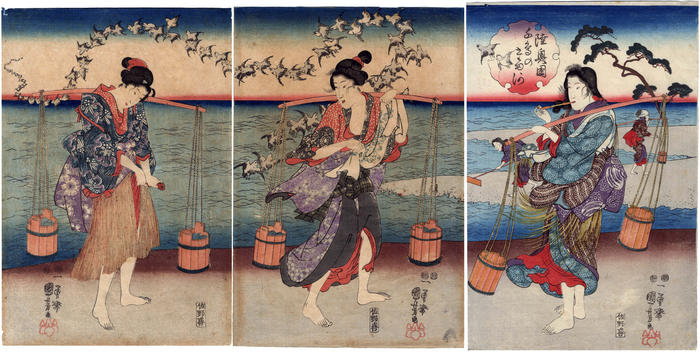 The theme of women collecting salt has been combined in this triptych with the ancient subject of 'Six Jewel Rivers' (Mu-tamagawa). The six rivers, at various locations throughout Japan, are celebrated in classical poems for their beauty. By Kuniyoshi's day they had also become the subject of popular songs and dances. 'Plover Jewel river' (Chidori no Tamagawa), also known as the Noda Jewel river, links the towns of Shiogama ('Salt Kiln', a name reflecting the river's historical connections with salt-making) and Tagajō in modern Miyagi prefecture, where it flows into the Pacific."

Quoted from: Kuniyoshi from the Arthur R. Miller Collection by Timothy Clark, p. 162. There is a color illustration on pp. 162-3.

The significance of chidori in Japanese art, history and culture

Merrily Baird wrote in her book Symbols of Japan... "The word chidori - usually translated as plover - refers to several migratory shorebirds that transit Japan in spring and autumn. Chidori in flight have been a favored theme of art and poetry for more than a thousand years, and the birds appear on lacquerware, kimono, sword furnishings, ceramics, and netsuke. Portrayed in large numbers and in highly stylized manner, they are usually paired with waves, rivers, shorelines, or fishing nets."

In several regards, the chidori is an auspicious symbol for the warrior class. The first ideograph used to write the word means "one thousand," and the second is a homophone for the words "seize" an "capture." Because the bird overcomes high waves and strong winds to migrate, it is seen as an emblem of perseverance and the conquering of obstacles. Finally, it is associated with the legendary hero Yamato Takeru, whose body and soul are said to have taken flight after his death as a giant white chidori..."