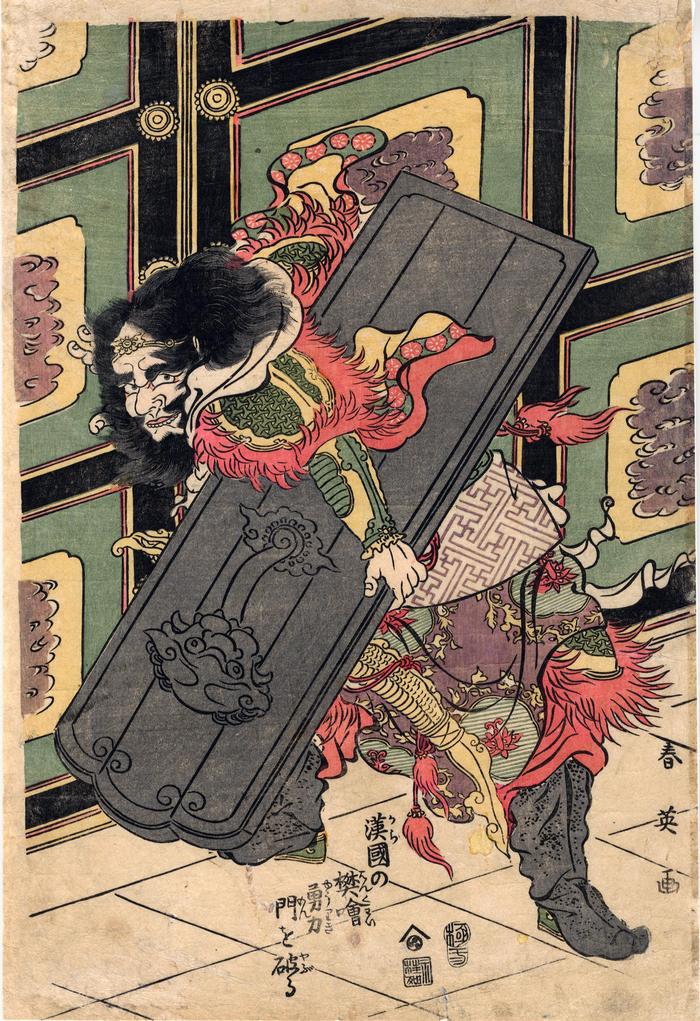 Fan Kuai (樊噲), feigning drunkenness, storms the dining hall of the emperor's palace by breaking down the door

The text reads: 漢国の樊噲勇力門を破る. Loosely translated: 'Fan Kuai breaking down the Han gate'. In this case Han means for China.

Fan Kuai (died 189 BC) was a military general in the early Han Dynasty.

His name in Japanese is Hankai.

Sebastian Izzard in Kunisada's World wrote on page 107 about another print on this same them by Kunisada and very much like this one: "Like Liu Bang, Fan Kuai... came from a lowly background. He was an early follower of Liu Bang, and when the latter became emperor he was appointed minister. In 196 B.C., suspecting a plot against the emperor's life at a banquet, Fan stormed into the dining hall, carrying part of a screen under his arm as a shield, the incident shown in this print. After eating and drinking to excess, Fan feigned drunkenness and upbraided the plotters, allowing the emperor to escape."

In Masterful Illusions: Japanese Prints in the Anne van Biema Collection it says on pages 198 and 201: "Fan Kuai (in Japanese, Han Kai), a dog butcher by trade, was one of Gaozu's earliest and closest companions. Gaozu [高祖] regarded him so highly that he wed him to his wife's younger sister. Fan Kuai was renowned for his loyalty to the emperor.

The last stages of the civil war that followed the collapse of the Qin dynasty and resulted in the establishment of the Han pitted Gaozu against Xiang Yu, a man of noble descent. Gaozu had entered his chief rival's camp at Hongmen and accepted an invitation to drink with him. His followers were wary, but he insisted. In the course of drinking, a number [of] Xiang Yu's followers urged him to eliminate his rival then and there. When Fan Kuai learned of this, he armed himself,forced his way into Xiang Yu's camp, and burst into the tent where the rivals were drinking, in order to defend Gaozu. The Historical Records describing his knocking the camp sentries to the ground by 'tipping his shield to either side' and how, when he confronted Gaozu's enemy, 'his hair stood on end and his eyes blazed with fire'....

The blue-ground cartouche with ornate frame in the center foreground contains the set and print titles, followed by a short descriptive caption: 'Enraged at the banquet at Hongmen, he breaks down the gate to the camp.' "

"Fan Kuai, the other old friend and a brother-in-law who saved Liu Bang's life at Xiang Yu's Banquet at Hongmen, was the backbone of most campaigns against the kings, personally capturing Zang Tu, seizing Han Xin, attacking Chen Xi, and killing the king of Hann. When the emperor was wounded and on his deathbed, he entrusted Fan Kuai to execute Lu Wan. But before he could complete this duty, he too was ordered to be executed, on the charge of plotting with empress Lü to kill Liu Bang's favorite consort and son."

"...the order for executing this brother-in-law, the last companion left, was issued from the emperor's deathbed, as a desperate attempt to prevent the rise of the empress's power. The brother-in-law was pardoned by the empress after Liu Bang's death." (Ibid., p. 48)

In his youth Fan Kaui was described as a lawless hooligan. After Liu Bang had defeated the King of Qin and had accepted his surrender, Fan Kuai begged to be the one to kill this enemy, but Lui Bang felt it was more important to show mercy and allowed the king to live. Fan Kaui (Hankai in Japanese - d. 189 B.C.). His story was particularly popular during the Tokugawa period and was even noted by Chikamatsu Monzaemon.

What really happened according to The History of the Former Han Dynasty by Pan Ku (班固 : 32-92)

The Lord of P'ei had captured the Ch'in capital first and secured its treasures. His more powerful rival, Hsian Yü, arrived too late, but planned on taking the prized city thereby making himself the supreme ruler. The Lord of P'ei learned of this and went to Hsian Yü to try to assuage his anger and assure him of his loyalty. Convinced Hsian Yü invited the Lord of P'ei to dine with him. Some of Hsian Yü's commanders wanted to kill the guest. The plan was to perform a sword dance and in the process slay the Lord of P'ei. However, one of the lord's lieutenants got up to counter this plot by performing his own sword dance. All of this action was actually taking place in a camp tent and not a castle. When Fan K'uai got wind of the plot he stormed into the tent, but was momentarily calmed and was offered some wine. After he drank it he railed against his host Hsian Yü.

Fearing danger the Lord of P'ei asked to be excused to relieve himself outside. He had Fan K'uai and others follow him. So as not be make his host too suspicious he skipped going to his chariot to flee back to his own camp. "He mounted alone, with Fan K'uai... [and others] following on foot, and fled to his army by unfrequented paths, ordering Chang Liang to stay and make apologies to [Hsian Yü]." Chang Liang then presented him with some precious jade pieces.

Shortly thereafter the Lord of P'ei won the day and became the first emperor of the Han dynasty.