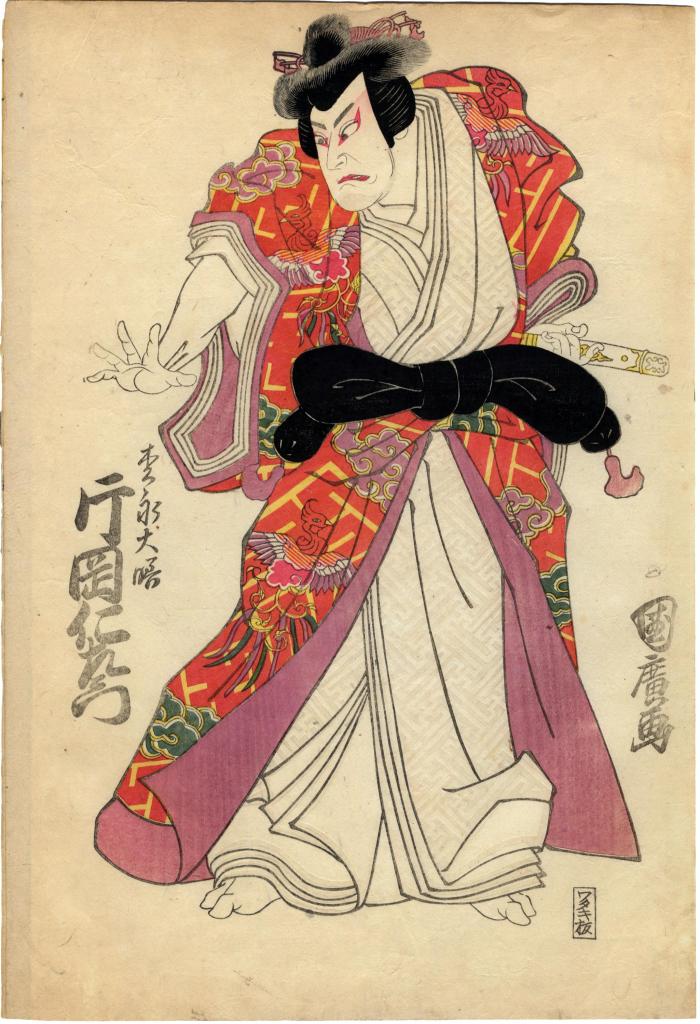 This print commemorates a performance at the Kado Theater in the fifth month of 1816.

Gion Sairei Shinkōki was an extremely long play written originally for the puppet theater. It was first staged in 12/1757 in Osaka. There were four authors of whom we know little. In 1758 the first kabuki production appeared in Kyoto. "The play is set in the second half of the sixteenth century, a time of civil war in Japan, when numerous provincial lords vied to seize control of the country."

Elena Varshavskaya in her endnotes to Heroes of the grand pacification: Kuniyoshi's Taiheiki eiyū den on page 168 gave a great summary of the life of the historical Matsunaga Daizen:

Originally from a merchant family in Nishinooka in Kyoto, he was in the service of Miyoshi Chōkei... a powerful and influential feudal lord. When Chōkei entered Kyoto in 1549, Hisahide first became a noticeable figure. In 1560 he built a castle on Mt. Shigi from where he governed the provinces of Yamato and Kawachi. Hisahide was steadily destroying the Miyoshi clan which he served. In 1563 he poisoned Miyoshi Yoshioki... Chōkei's son, and made Miyoshi Yoshitsugu... Chōkei's nephew and adopted son, proclaim him, Matsunaga Hisahide, the heir to the house. Two years after that, in 1565, the shogun Ashikaga Yoshteru refused to appoint Hisahide to the position previously held by Chōkei, who died one year earlier. Then Hisahide attacked the shogun's palace Nijo, and the shogun had to take his own life... In the course of the military conflict in Nara in 1568, Matsunaga Hisahide burnt Daibutsuden, the major temple in the Buddhist center of Tōdaiji. Next year, he surrendered to Oda Nobunaga, who made him shugo - a military protector - of Yamato province. After that he fought against Asakura Yoshikage and attacked Ishiyama Honganji... Sometime later together with Miyoshi Yoshitsugu he started a rebellion against Nobunaga. Defeated by Nobunga, he left his associate and thus contributed to the fall of the Miyoshi family. In 1577, Hisahide was contemplating a new rebellion. That time Nobunaga sent his son Nobutada and a vassal Tsutsui Junkei... to besiege Hisahide in his castle on Mt. Shigi. The castle was burnt and Matsunaga Hisahide committed suicide. While Kuniyoshi portrays Hisahide ready to commit seppuku. according to the Shigi castle history his death happened otherwise. Not wishing his head as well as his famous teakettle Hiragumo... to fall to Nobunaga's hands, he tied the kettle to his neck, went up the castle tower, set fire to gunpowder and blew himself up.