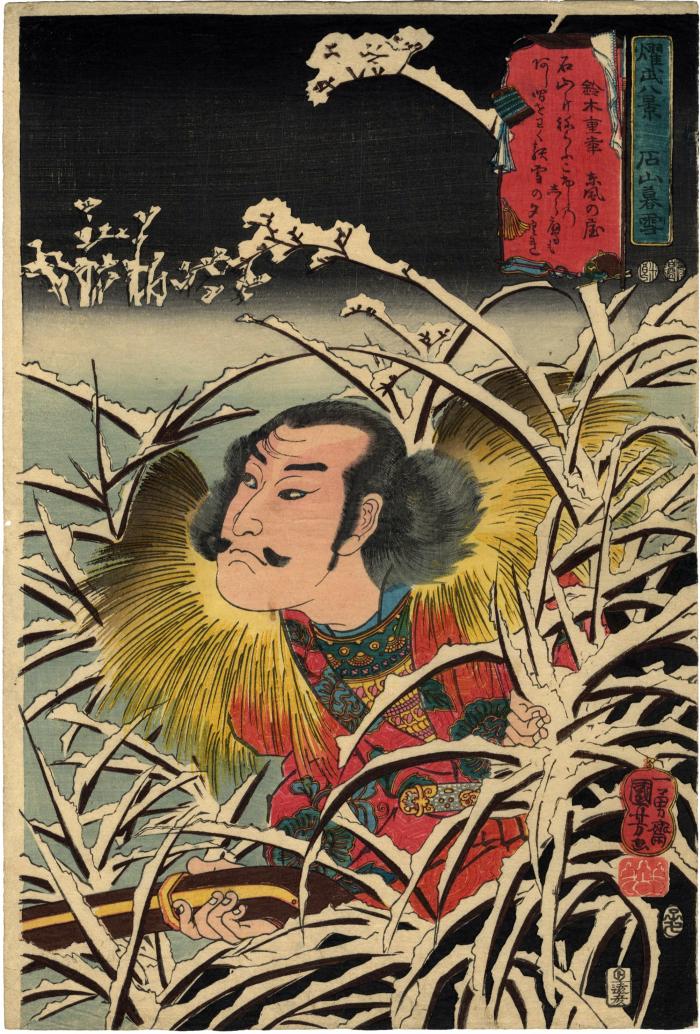 "Suzuki Saemon Hida no kami Shigeyuki is a marksman who attempts unsuccessfully to shoot Oda Nobunaga (1534-82) during an ambush at Ishiyama. this scene is compared with Lingering snow at Ishiyama from the Eight views."

There is an earlier series by Kuniyoshi, the Taiheiki eiyuden, from the late 1840s, which also has a print of Suzuki Shigeyuki laying in wait to ambush Oda Nobunaga, but in that case Shigeyuki is set among reeds in summer and not winter.

Elena Varshavskaya in the endnote 28.1 to her volume Heroes of the grand pacification: Kuniyoshi's Taiheiki eiyū den, while discussing a different print, said:

"He was an influential person in the Buddhist community of Saiga in Kii province. Along with Buddhist centres Ishiyama Honganji... and Negoro... the community of Saiga had protracted hostilities with Oda Nobunaga. During a ten-year long confrontation (1570-80) between Nobunaga and Ishiyama, Suzuki commanded the artillery of Negoro and Saiga and kept harassing Nobunaga's army. According to the warrior's biography retold on the print, he did not live to see Oda Nobunaga's victory over the Buddhist forces. A biographical dictionary of Japanese warlords of the Warring States period, however, describes the development of the events otherwise. When the resistance of Ishiyama Honganji was crushed, Suzuki Shigehide acted as an intermediary between Honganji and Nobunaga. After Hideyoshi subjugated the province of Kii, Suzuki Shigehide followed him. He is known in Japanese history under the name Saiga Magoichi."

There is another copy of this print in the Pushkin State Museum.