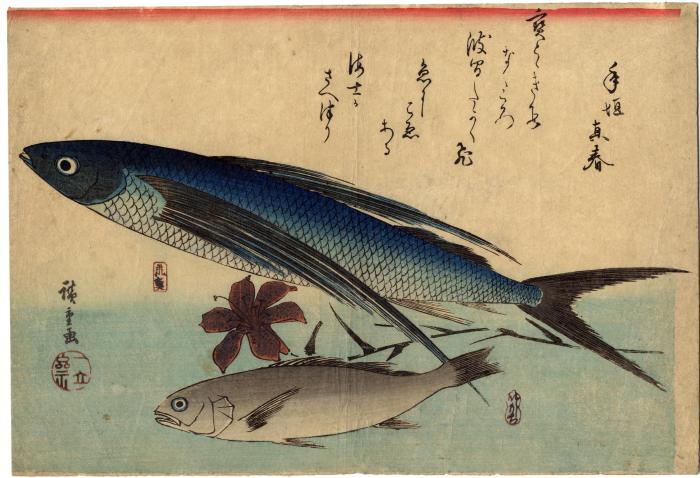 "In c. 1832, when Hiroshige was experiencing his first period of success and had been approached with multiple commissions, he also turned to a subject which up to that point nobody had dealt with in a similar way. Perhaps there wee two precedents in book form, both anthologies of haiku: Katsuma Ryūsi's beautiful haiku book titled Umi no sachi, (Boon from the sea, 1762... and Kitao Masayoshi's Tatsu no Miya Tsuko (Servitors to the Dragon Palace, 1802)...

A group of poets commissioned the production of an album of ten prints illustrating fishes accompanied by kyōka verses. The name of the group is unknown, but the names of the individuals include some well-known poets, some of them affiliated to the Yomogawa circle. The first edition of ten prints was issued in album form, and therefore all the designs have a centerfold. The names of the poets are presented alongside the poems, though the publisher's seal and kiwame censorship seal are absent. Just as in the case of the Edo kinko hakkei no uchi series... commissioned by the Taihaidō group, the fish series which at this point included 11 designs, appeared slightly later in a commercial edition published by Nishimuraya Yohachi around 1832-34. in 1840 nine prints were added carrying the publisher's seal of Yamada Shōjirō."