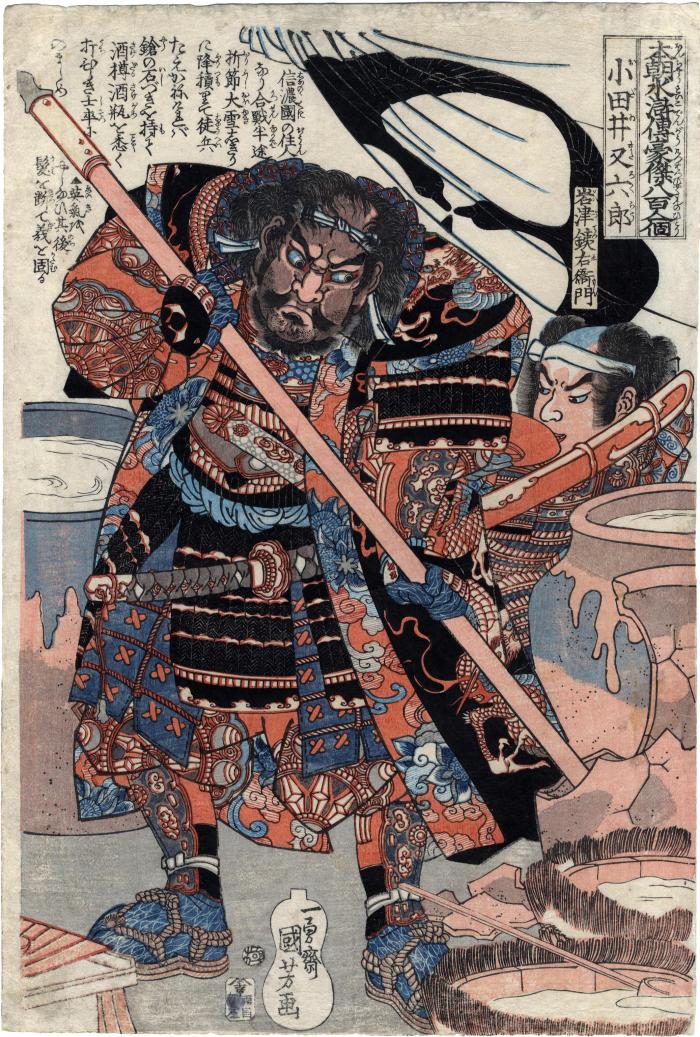 The text in the upper left reads: 信濃国の住人なり合戦半途折節大雪しきりに振積りて従兵たえかねければ鎗の石づきを持て酒樽酒瓶を悉く内ひらき士卒にのましめ」「▲英気をやしなひ其後髪を断て義を固る

Elena Varshavskaya in her book Heroes of the grand pacification: Kuniyoshi's Taiheiki eiyū den, in the end notes on page 162, number 3.4, gives a good description of the source of this scene. The jars, despite the description - see the note below - were filled with water and not saké. Varshavskaya wrote of

...Shibata Katsuie's [the actual name of the figure portrayed here] defence of Chōkoji castle in Ōmi province (1570). Oda Nobunaga who owned the castle entrusted Katsuie with its protection when Sasaki Shōtei... a feudal lord from Ōmi, besieged it. At the critical moment Shibata smashed all the water jars in the castle urging the defenders to fight to the death. The victory thus gained brought him his legendary nicknames - 'smashing jar Shibata' (kamewari Shibata) and 'Shibata the devil' (oni Shibata). The situation became one of the 'standard' among the episodes from Taikoki portrayed in ukiyo-e.

In note number 3.9 Varshavskaya tells us that this Kuniyoshi print was the first time this episode was portrayed - by him, at least.

There is a fair amount of confusion over the title of the series which includes this print. This is understandable since the kanji reads as '800' instead of the usual '108' associated with the tales of the Water Margins. Most modern scholars writing in English refer to this series as '108 Heroes...' despite the fact that the literal translation is different. Robinson used the literal translation. Timothy Clark explains why:

"Following the success of the 1827-30 series 'One of the 108 Heroes of the Popular Water Margin'... the publisher Kagaya must have looked for further ways of capitalising on the popularity of the Water Margin theme. Tatebe Ayatari (1718-1773) had already transferred the setting of the stories to ancient Japan in his novel Honchō Suikoden (Native Water Margin). The present series features Japanese heroes from all historical periods, depicted in the medium of the colour woodblock print. The range is wide: some designs show heroes of recent popular fiction... others contain hidden references to subjects forbidden by censorship regulations... The style and the method of presentation continue seamlessly those of the earlier series, which had depicted Chinese brigands.

The series title indicates that the aim was to catalogue eight hundred Japanese heroes rather than 108 Chinese, and this doubtless reflects national pride (in other contexts '800' has the generic meaning of 'a lot'). In the event, far fewer designs were produced, Robinson lists twenty-seven, which he divides into three groups... More recently, Iwakiri Yuriko has written a detailed article on the series, reproducing all thirty known designs and discussing their possible sources... She, too, divides them into three groups, in accordance with the dates of publication she ascribes to them: A (1830-32), B (1833-35) and C (c. 1836). Group A she subdivides into three further groups, each with the title in a different calligraphic style. She also notes that the word for 'heroes' in the title was changed from gōyū to gōketsu after twelve designs had been published. Block-ready prepatory drawings survive for several more designs showing Japanese heroes in a similar style... These were prepared in 1833-35 for a rival publisher, Yamaguchiya Tōbei, and they do not include a series title."

Quoted from: Kuniyoshi from the Arthur R. Miller Collection by Timothy Clark, p.53.

"The text on this print claims that he image represents Odai Matarokurō shattering a large saké jar while Iwazu Tetsuemon crouches behind him drinking from a bowl. This event took place in about 1544 during Odai Matarokurō's war with Takeda Shingen (1521-73...), the warlord of Kai Province (present-day Yamanashi Prefecture). This conflict is described in the Ehon Kōetsu Gunki (Picture Book, Chronicle of the Battle between the Takeda and Uesugi) by Hayami Shungyōsai, 1807.

Despite the fact that the two men listed as the subjects of this print were real warriors with their own histories, this image is a striking example of a 'disguised' Taikoki subject in that the warrior shattering the jar is in fact Shibata Katsuie... The wild geese on his right hand and the curtain behind him are taken from the crest of the Shibata family, a further indication of his identity.

On one occasion, when hard pressed by the Rokkaku forces, Katsuie smashed his own side's water jars to demonstrate how resolute and sure of victory he was. He inspired his men and became known as 'Kamewari Shibata' ('Shibata the jar-Breaker'), the real subject of this print.

In 1572, when Katsuie had brought all of Echizen Province under his sway, he devoted himself to the economic development of the Hokuriku region in central Japan. He built a nine-storeyed keep at Kitanoshō Castle where he welcomed artisans and merchants from the defeated Asakura, who had defied Nobunaga.

Following Nobunaga's death in 1582, Katsuie took a stand against his rival Toyotomi Hideyoshi. He attempted to raise an army, but the snow-bound Hokuriku region debilitated his efforts. He was defeated the following year, 1583, at the Battle of Mount Shizugatake.